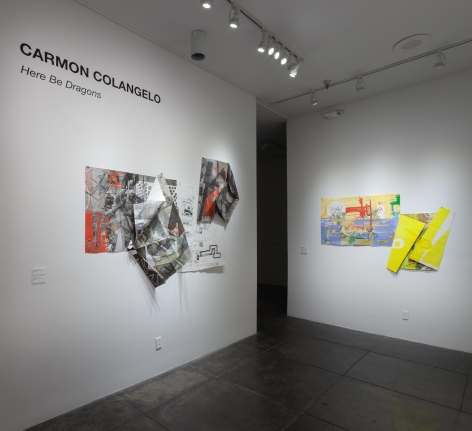 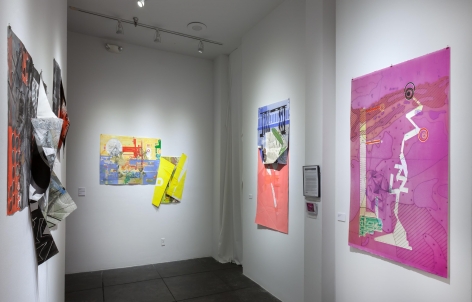 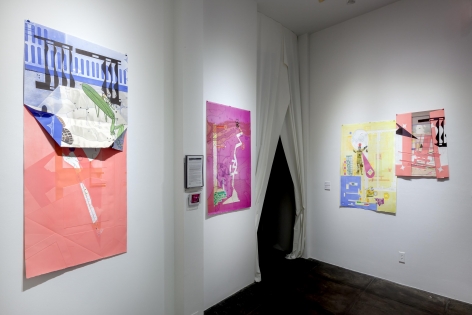 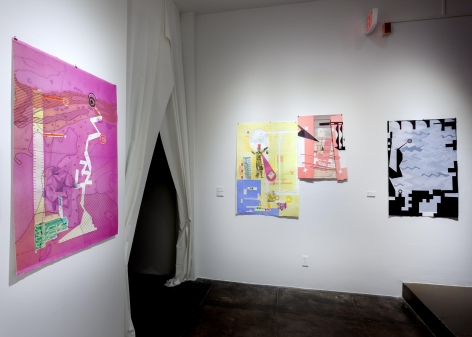 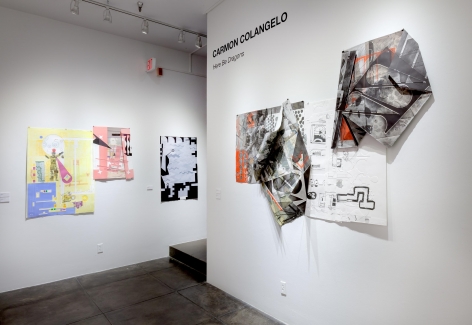 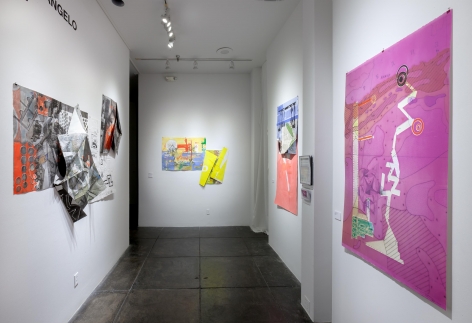 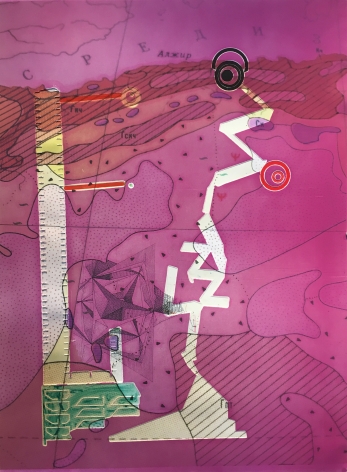 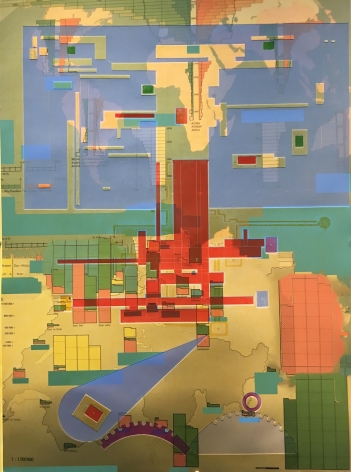 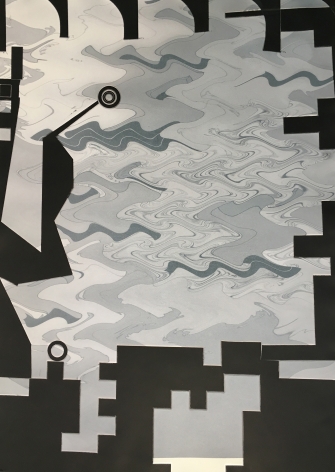 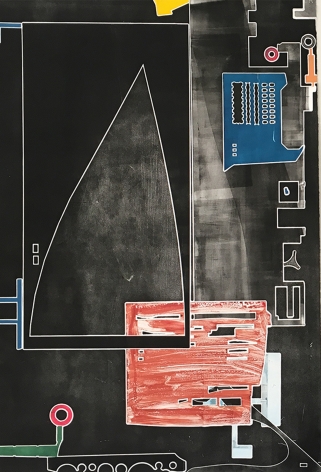 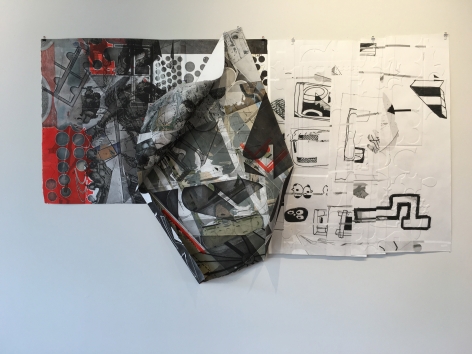 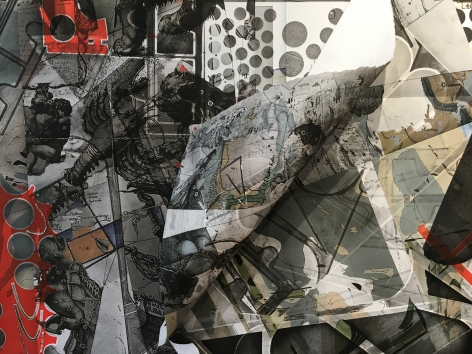 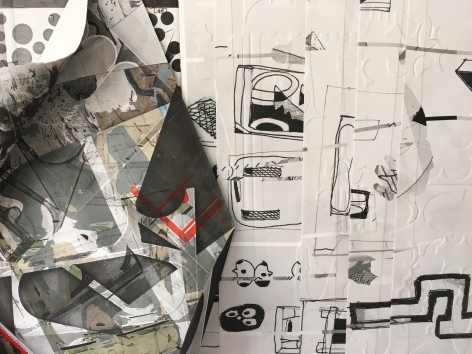 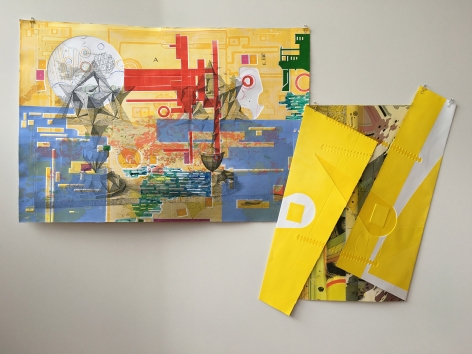 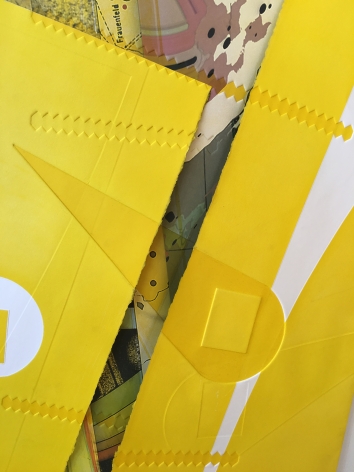 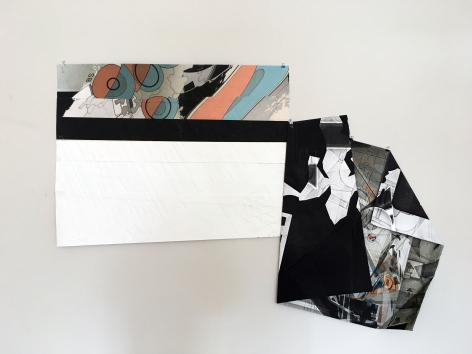 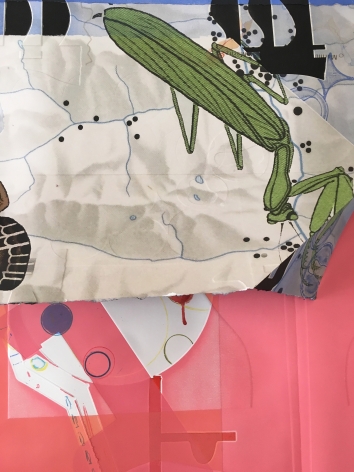 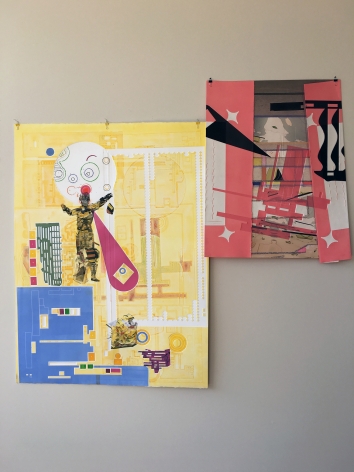 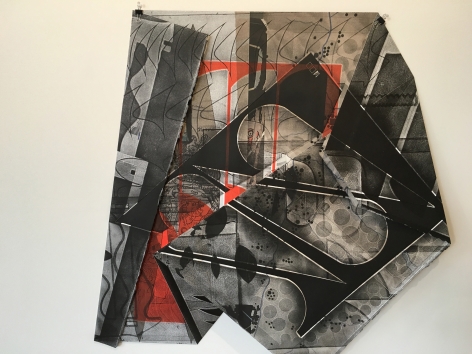 JONATHAN FERRARA GALLERY is pleased to present Here Be Dragons, an exhibition of St. Louis-based artist Carmon Colangelo. For his first solo exhibition at the gallery, the artist debuts his newest monotype relief prints, printed in 2016 at Flying Horse Editions in Orlando, Florida. The exhibition will be on view in the main gallery from 5 November through 31 December 2016 with First Saturday Gallery Openings on 5 November and 3 December from 6-9pm.

The artist says of the exhibition . . .

“Here be Dragons” is an exhibition of monotype relief prints responding to our current political environment and the precariousness of our contemporary condition in the age of social media. This series of work expands on my personal taxonomy of images, psycho-geographies and ongoing daily practice of mapping and recording ephemeral information to respond visually and physically to the notion of global connectivity and our networked communities. Derived from hand drawings and digital processes combined with chance operations, found materials and printing from discarded laser cut plates from architectural models, the result is a generative series of colorful, haptic and playful works intended to express ideas about the anxieties, fears, and instability experienced around the world. The phrase and title for the exhibition, “Here be Dragons”, first appeared on the Lenox globe in 1510 as a marker for dangerous and uncharted waters ahead.

Carmon Colangelo is a pioneering printmaker whose work combines surrealism and abstraction with the exploration of art history, science, and technology. His imagery presents a playful odyssey that references the meta-narratives of art history and is contingent on the juxtaposition of utopian ideals of modernism with the aesthetics of surrealism and conceptual art. An enduring feature of Colangelo's work is the unraveling of free-floating symbols and texts in an aggressive exploitation of various print media. He challenges conventional readings, producing disorienting spatial topologies and striking visual poetics. His images may swing from the obsessively personal to the openly topical, allowing disparate formal structures and semiotics to inspire the production of remarkable forms that are somehow freed from the preceding visual context and grammar.

Colangelo joined Washington University in St. Louis in July 2006, as the first dean of the Sam Fox School of Design & Visual Arts and the E. Desmond Lee Professor for Collaboration in the Arts. In this role, he oversees the School’s four academic units — the College of Art, College of Architecture, Graduate School of Art, and Graduate School of Architecture & Urban Design — as well as the Mildred Lane Kemper Art Museum, which is home to one of the nation’s finest university collections of modern art.

A widely exhibited artist known for large mixed-media prints that combine digital and traditional processes, Colangelo’s work has been featured in 30 solo shows and more than 100 group exhibitions nationally and internationally in Argentina, Canada, England, Italy, Korea, Mexico, Puerto Rico, and across the United States. His work has been collected by many of the nation’s leading museums, including the National Museum of American Art in Washington, D.C., the Whitney Museum of American Art in New York, the Fogg Art Museum at Harvard University, and the Saint Louis Art Museum. From 1984 to 1996, Carmon headed the printmaking department at West Virginia University and was named chair of the Division of Art in 1993.  In 1997, he became director of the Lamar Dodd School of Art at the University of Georgia (Athens). Born in Toronto, Colangelo earned a BFA in printmaking and painting from the University of Windsor in Ontario in 1981 and an MFA in printmaking from Louisiana State University in 1983.