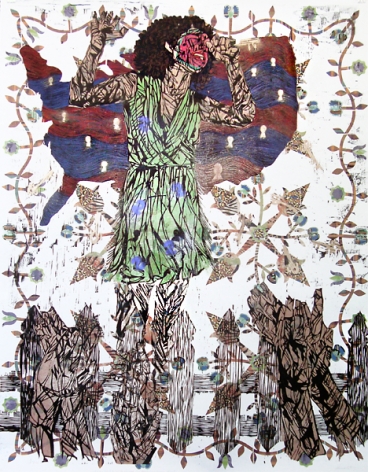 JONATHAN FERRARA GALLERY is proud to announce Initiating Cause and Effect, the premiere solo exhibition of artist KATRINA ANDRY.  The exhibition will be on view from 5 June through 25 July 2015 with an opening reception on Saturday, 6 June from 6-9pm. For her debut at the gallery, Andry has created 11 color woodcut reduction prints looking at the historical aspect of stereotypes perpetuated against black people; how they came to be, what they are based on, and in what ways they are harmful to African Americans. She depicts white males, seen as figures of authority, in black face acting out what people generally perceive to be stereotypes of black culture. This masquerade suspends reality and denotes the importance of perception and offers the lense through which the West perceives the Other.

Andry says of her work . . .
Stereotypes are deeply ingrained in Western culture and are used almost instinctively in order to deal with our differences. Stereotypes are reiterated in our culture on a daily basis by the Media in all forms and it’s hard to deny that the source of information has much to do with how one perceives the world. The media plays a heavy role in the propagation, perpetuation and continuation of stereotypes in our society.

The byproduct of these stereotypes is that they also create differences between people, and stereotyping establishes an arbitrary set of societal norms/rules that benefit the majority while it disenfranchises other groups of people. My work challenges ideas about black people (Other) that once ago had scientific research qualifying them, and how these ideas or stereotypes have become a part of how we see each other whether consciously or unconsciously.

A native of New Orleans, LA, KATRINA ANDRY received an MFA in Printmaking from Louisiana State University, Baton Rouge, LA in 2010. Her work explores the negative effect stereotypes have on people of color. In her practice, Andry often creates large scale, color reduction wood cuts portraying white men in black face, or more recently watermelon face, acting out a stereotype that is most often placed upon people of color. She currently works and lives in New Orleans and is represented by JONATHAN FERRARA GALLERY.

Andry was listed in the January-February 2012 issue of Art in Print as one of the top 50 printmakers and most recently is featured in the forthcoming New American Paintings, #118.  She is an active member of the Staple Goods Collective in the St. Roch neighborhood of New Orleans and has been awarded several residencies including: the Joan Mitchell Center of New Orleans, Anchor Graphics in Chicago, and Kala Art Institute in Berkeley, CA.