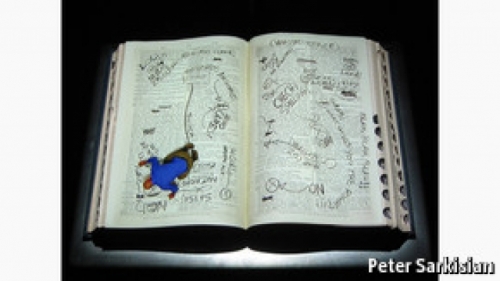 The work of Peter Sarkisian, a multimedia and video artist based in Santa Fe, was clearly seen as a highlight of Art SV/SF. “Robot”, (2013) a steel and aluminium, 3D-printed robot that displays a film on its belly, was featured on the the fair's website.

"...which features a dictionary lying open while a video is projected onto its pages. In the video, Mr Sarkisian crawls around on his hands and knees wielding a black marker, scratching out words that he deems redundant or antiquated and making a series of scathing comments. At one point, he slips and falls into the crack along the book’s spine, disappeared and rendered useless himself. A few seconds later however, he crawls back onto the pages to continue his task. His intentions remain unclear. Is he trying to update or perfect language? Is he trying to tell us that attempts to contain and catalogue—particularly in print, a medium that is itself under threat—are doomed to failure or irrelevance? Or is his message about the nature of editing and imposing individual perspectives onto the work of others?"