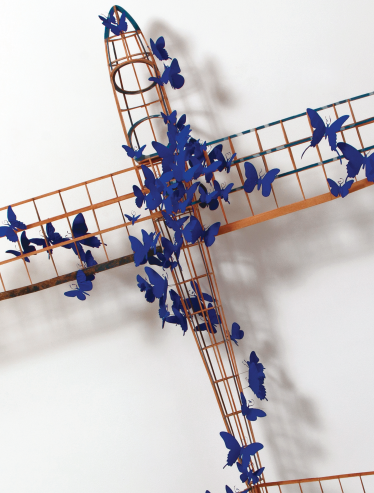 They start as trash. Discarded cans, littering the streets of New York City.

Paul Villinski collects them. And then he transforms them.

From soda and beer cans he coaxes butterflies. From garbage he elicits art.

Villinski’s work explores flight and transformation, using the ultimate symbol for both, the butterfly.

His work debuts in Jackson at Tayloe Piggott Gallery in a solo show called “Alight” that hangs through Oct. 16.

“That’s basically what is happening, the butterflies are alighting on different objects,” Villinski said.

The show, which will feature about 12 pieces of new work and two older pieces, will transform the space, said Carolyn Reeves, associate gallery director. The sculptural work will take over the gallery.

There is a movement and lightness to Villinski’s art, Reeves said. And he uses a variety of colors.

“There is a real initial visceral appeal to this that all ages will appreciate,” she said.

Villinski used old police barriers to create one sculpture of a plane with an 8-foot wingspan. Two hundred orange and yellow butterflies trail behind the plane and across the wall. It’s cheerful and optimistic, Villinski said.

For all of the levity, some pieces explore darkness. “Sage” takes a weathered wooden chair from the 1940s and sets it teetering on one leg. A large flock of black butterflies seem to pull the torqued chair skyward, levitating it in a dark cloud.

In addition to his large sculptural installations, Villinski collaborates with artist Amy Park, who creates large abstract watercolor paintings to which he adds butterflies.

They are “lush and beautiful” pieces, he said.

All of the pieces in the show feature butterflies, a trope that has run through his work for 20 years. Butterflies amaze him, their beauty and also their tenacity. The winter migration of Monarch butterflies to warmer climates more than 2,000 miles away in Mexico is one of the world’s great mysteries, he said.

“They are really astonishing little flying creatures,” he said.

“They are a wonderful metaphor for human beings,” he said.

Flight inspires his art, but also his life.

Villinski loves to fly. He is a paraglider and a glider pilot who identifies with flying creatures. When he’s in the air, he’s able to think of nothing but the task at hand. For him, flying is about being in the moment. He likes the sense of looking below and seeing the world as a puzzle, how the pieces fit together. The feeling of floating also fascinates him.

He appreciates the aesthetic value of objects that can fly. His sail plane is a machine engineered to fly, but its form is also beautiful from a sculptural standpoint, he said. In a way, such engineered beauty is what he emulates in his work.

To create his butterflies, Villinski collects littered aluminum cans. He flattens and snips the tin into butterflies that he then paints.

“All of my work revolves around transformation or is an exercise in possibility,” Villinski said. “If we can take discarded aluminum cans off the streets of New York City and turn them into beautiful butterflies, what else is possible?”