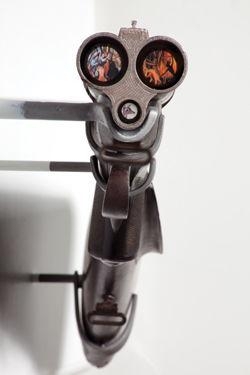 You find yourself looking into the barrel of a gun.

On the other end sits an image of the “Last Judgment,” with the good rising into the gates of heaven and the bad being cast into hell. Below that is Bambi’s mom – from Disney.

“The idea that somebody decided her life was over seemed like the ultimate last judgment,” says Adam Mysock, in an artist video. “As the shooter, you are ultimately taking on a godlike role determining when somebody is good or bad. For me, the first phenomenon I had experiencing such an event was actually watching ‘Bambi’ when Bambi’s mother gets shot.”

While the death of Bambi’s mother may resonate with many viewers, looking down the 21-inch J.P. Sauer Sohn shotgun probably does not. But, it sets the stage for conversation, and that’s the goal of the exhibit “Guns in the Hands of Artists,” in which Mysock’s piece “Looking Down the Barrel of a Gun” is featured.

Mysock, a Tulane University professor in the arts, witnessed his first murder in 2004 in front of his house. He watched an unarmed 16-year-old boy get shot times in the chest.

“At that point violence in New Orleans became too real for me,” he says. “It became very personal.”

Eight years earlier, Jonathan Ferrara, a gallery owner, and asrtist Brian Borrello had already embarked on a project to address the prevalence of gun violence in New Orleans. The resulting exhibit, “Guns in the Hands of Artists,” drew national media attention, and then it disappeared.

“Fast-forward to after Columbine and Sandy Hook, and I felt compelled to revisit this exhibition,” says Ferrara, who still owns an eponymous gallery in New Orleans. “My career had changed and same with gallery. But I wanted to re-embrace this project because it’s something that I can do.”

Working with the City of New Orleans and the New Orleans Police Department, Ferrara obtained 186 guns through the local gun buy-back program, and dispersed the decommissioned weapons to more than 30 local and national artists in everything from film and photography to painting and poetry. They were given little direction except to turn the guns into art.

The second iteration of the exhibit debuted at his gallery in 2014. Instead of simply putting guns-into-art on display, Ferrara added an educational component which brought in youths affected by, or part of, gun violence to talk about guns and their role in society. One of the most powerful conversations shows a 16-year-old boy concluding the next time he touches a gun it will be to make art out of it.

It’s already lasted longer than its first month-long run in the ‘90s. “Guns in the Hands of Artists,”assisted locally by Aspen Institute art registrar Lissa Ballinger, opened to Aspen Ideas Festival participants in late June, and will remain on  display through the end of the month when the Aspen Action Forum takes place. The Aspen Institute is offering four days for the public to see the exhibit, and Ferrara – who has previous ties with the Institute as a speaker at the forum – will give a talk next weekend about it.

The show is intense, and Aspen may seem an unlikely place to put it on display given the rarity of gun violence in the Roaring Fork Valley. But with the exhibition’s evolution, Ferrara says it’s an ideal place. His hope is that it travels the country and then can be replicated in communities like Chicago, Cleveland and New York, and the well-connected Ideas Festival and Action Forum audiences, as well as Aspen residents, are a way to maximize exposure.

“Through the lens of art maybe our perspective can be changed slightly so we can make changes that make sense,” he says.

Given how polarizing the gun control issue is in America, this exhibit allows dialogue to happen in a different sphere.

“Through a visual perspective we can have this conversation,” he adds. “It’s a meeting ground for people to have a conversation about the issues.”

One of the most poignant pieces in the current exhibit, which has 33 pieces of art, is a work done by Marcus Kenney. It’s a photograph of a young blonde girl in a white dress, innocently holding a gun pointed at the sky. What’s impactful about the piece is it’s not a work at all. Kenney is a South Carolina-based photographer known for candidly shooting images of family, and this particular photo, “Girl with a Gun,” happened naturally when his daughter picked up the decommissioned gun given to him by Ferrara and started dancing with it in their yard. Kenney noticed the gun was gone, and luckily had his camera when he discovered where it went.

“It’s a beautiful photograph,” says Ferrara. “But what’s more impressive is the message.”

He says the number of United States homes with unlocked firearms is in the millions, but only one state requires those weapons to be locked.

“That could have been a loaded gun,” he adds. “This exhibition, from a gun enthusiast or NRA perspective, might be hard to swallow, but I think we can all agree we want to protect our children.”

Many of the works have stories that are equally powerful, and they return to the permanence of death made by decisions that are often less so. A 9-millimeter semi-automatic machine pistol nicknamed the “streetsweeper” gets a 21-foot welded steel tail that trails out like a magazine and circles back to the gun in a metaphor; bullets inserted into the wall with tiny images of children’s faces; and a gumball machine dispensing 2,000 rounds of .22 hollow point bullets to anyone with a quarter all haunt the viewer after leaving the exhibit.

“I hope there’s some nuance in what we’re authoring so they find some middle ground so there can be some sort of compromise,” says Mysock at the end of his artist interview. “I can’t imagine that anything we create is more impactful than a human life.”