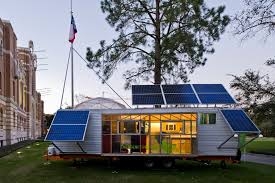 It started as a FEMA trailer, but artist Paul Villinski added solar panels, a dome, a 40-foot wind turbine and lots of interior artists' amenities to turn it into an 'Emergency Response Studio.'

It started out as an ordinary 30-foot Gulf Stream Cavalier trailer, the exact sort supplied by the Federal Emergency Management Agency as housing after the 2005 storm and flood. It eventually became an $85,000 rolling artist's studio, complete with drawing table, sculpture workshop and lots of natural light. And somewhere along the line, it came to look like a UFO, with a clear dome on the roof, solar panels angled toward the sun and a 40-foot mast that looks like an antennae for contacting the mother ship.

New York artist Paul Villinski, 48, said he wasn't able to buy an actual used FEMA trailer for the project, because the well-known formaldehyde hazard had made them unavailable. But he was able to pick up a 2001 model for $5,000; it looks just like the real ones parked a block from the Holy Cross address where his completed installation, titled "Emergency Response Studio, " now sits. The way he tricked out the trailer would have set him back something like $80,000, he said, if it hadn't been for donations of hardware and supplies.

It's an amazing place, from the drop-down painting deck to the see-through wall to the tiny living quarters -- much nicer than most artist digs. It's one of the most ambitious of the many ambitious works in Prospect.1 New Orleans, the city-spanning art exhibit that opens today.

Villinski takes in the view from a window installed on his renovated FEMA trailer. 'Visual artists have a way of thinking that's unorthodox, and they may be able to bring something different and valuable' to recovery efforts, Paul Villinski said.

Villinski visited New Orleans in summer 2006 to create works for an upcoming show at Jonathan Ferrara Gallery. He produced a flock of cut-out butterflies, made from those plastic yard signs that were all over the place back then.

To his surprise, Villinski found that the city still was struggling to bounce back from Hurricane Katrina.

"I was astonished and angered by the state New Orleans was in a year after the storm. I was deeply dismayed by the federal government's inability to help in a meaningful way, " he said.

If there were a silver lining, Villinski decided, it could be found in the way that artists were playing a significant role in the comeback.

"I think artists in 2006 were part of a collective catharsis, " he said. "Much of their work gave voice to the grieving process, and their hopes for recovery."

Villinski craved more involvement in this artistic process. He wanted to "get both feet in and really understand what was going on ... to try to contribute creatively in some way."

He imagined moving into the Lower 9th Ward and creating sculptures there amid the rubble. But, he said, "it proved logistically impossible."

That's when the light bulb went off.

Villinski's art was all about converting ordinary objects into extraordinary works of art. Why not begin with a FEMA trailer and finish with an off-the-grid, high-tech, artistic outpost?

To do it right, Villinski said, he had to virtually disassemble his $5,000 "toxic tin can" and rebuild it with healthier alternatives: recycled lumber, bamboo panels, linseed oil tiles and shredded denim insulation. For emergency power, he added an array of solar voltaic cells and a small wind turbine -- perched atop the 40-foot mast.

The interior of the trailer got a makeover as well, with an inviting mix of wood panels and modern fabrics.

"It's a well-loved FEMA trailer in the end, " he said.

On one level, investing tens of thousands of dollars in a FEMA trailer will strike New Orleanians as a touch absurd. But Villinski wasn't entirely angling for wry laughter.

"My work is not cynical and not ironic, " he said. "The piece really is my suggestion that visual artists potentially have a role to play in the healing and restoration of situations such as post-Katrina Louisiana. Visual artists have a way of thinking that's unorthodox, and they may be able to bring something different and valuable."