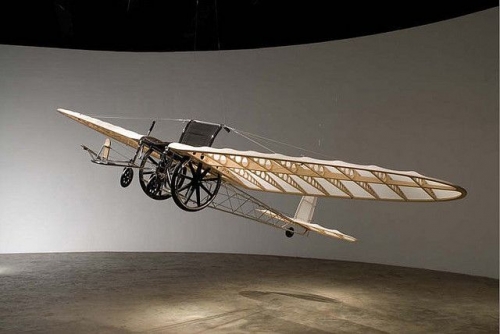 A wheelchair, sprouting wings, dangles from the ceiling. It glows in the twilit gallery, halforganic. half-mechanical, a hare-brained contraption for lifting the gravitybound into the sky; a hybrid scheme combining bird and machine. It is Paul Villinski's NAir Chair," a one-object installation at the Hillwood Art Museum at the C.W. Post Campus of Long Island University. Brookville.

"It's the perfect merging of my history, my hobby - which I'm very passionate about - and my subiect matter as a visual artist," says the soft-spoken and intense Villinski, taking a few moments' respite from installing the piece to sit down and chat.

Villinski, 47, is compelled by flight. It has colonized his imagination, his leisure and his work life. The son of an Air Force navigator. be seems to have aviation in the primordial fabric of his character. He spent his childhood building balsawood model airplanes. And at 13, he persuaded his parents to buy him a $5 build-it-yourselfhang-glider kit.

"When I had the framework completed, I found that I wasn't strong enough to pick it up. I was horribly disappointed to discover that I couldn't fly it. So I abandoned my dream of learning to fly."

Temporarily, as it turns out. Villinski discovered art at 14, dropped out of high school and meandered through assorted jobs. Eventually, he found his way to art school, graduating from Cooper Union in 1984. His paintings have always showcased bird's-eye views. "I have moments of identifying rather deeply with birds," he says.

When he hit his mid-30s, Villinski began challenging gravity with his body as well as his imagination, and the excitement spilled into hls art. He took up paragliding, which involves running off the edge of a cliff on the assumption that the wind will fill a large rectangular canopy and launch you on currents of air. Then, in 2004, he got a pilot's license and bought a sailplane, which has fixed wings but no engine.

Villinski wants viewers to wonder whether his gizmos actually work. (They don't, he says.) He goes to great pains to make his machines believable, using materials purchased from aircraft suppliers, engineering controls that look functional. He is enormously proud of a motorcycle helmet on top of which he attached a large wooden propeller driven by an engine: an object he describes as "an industrial-strength beanie" that seemed just credible enough to work.

This, too, harks back to a childhood experience. At age 7 or 8, he became fixated on a backpack helicopter in the pages of the Sears catalog. After much pleading. he received the thing for Christmas and was promptly disillusioned: "I was out on the lawn, running and jumping. and I was crushed, in the end, that it didn't work."

And so a kid disillusioned with mail-order novelties grew into an adult who constructs his own crazy gizmos: the helicopter helmet, butterflies fashioned out of.crushed beer cans. army-surplus boots with giant springs in the soles-all props for fantasies that flu tter on the thermal winds of second chances. Villinski makes art as a way of recyling his deflated dreams.