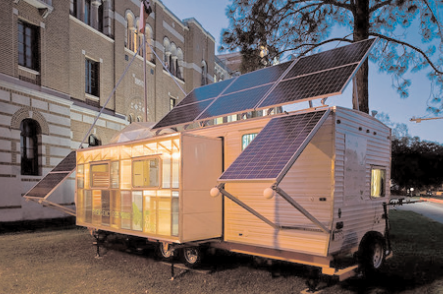 In the realm of green art, Paul Villinski must be a leader. First he remade discarded work gloves into wings. Then he turned discarded materials ranging from vinyl records to tin cans into butterflies in flight.

For perhaps his most ambitious project, he cast an eye on another mass-produced, widely hated symbol of failure, turning a 30-foot Gulfstream Cavalier trailer — much like the 50,000 built for the Federal Emergency Management Agency following the disaster of Hurricane Katrina — and turning it into an artistic survival headquarters.

"Emergency Response Studio" grew out of Villinski's own wish to have his materials from New York nearby as he created his own response to the disastrous state of New Orleans' Lower Ninth Ward.

The vehicle rolls into Middletown, alongside Wesleyan University's Zilka Gallery, this Friday, on the anniversary of another domestic disaster, 9/11. Viewers can check out Villinski's setup and experience for themselves the cramped quarters of a FEMAtrailer. In transforming the trailer to his needs, the Maine-born artist also responded to its environmental problems, replacing the harmful formaldehyde of the original with green technology, including a 1.6- kilowatt solar-powered system and a small wind turbine mounted on a 40- foot mast.

That's not to mention the recycled denim insulation, bamboo cabinets, linseed-oil-derived floor tiles and the use of compact fluorescent lighting and reclaimed wood.

First unveiled at last year's "Prospect.1.: New Orleans Biennial" and most recently seen at the Rice University Art Gallery in Houston, the trailer is making its northernmost stop.

Besides wandering through the trailer, visitors can look at designs, drawings and mock-ups in an accompanying exhibit, "Emergency Response Studio: Process," inside the gallery.

Villinski will speak about his work at the opening Friday at 5:30 p.m. The show continues through Nov. 8.