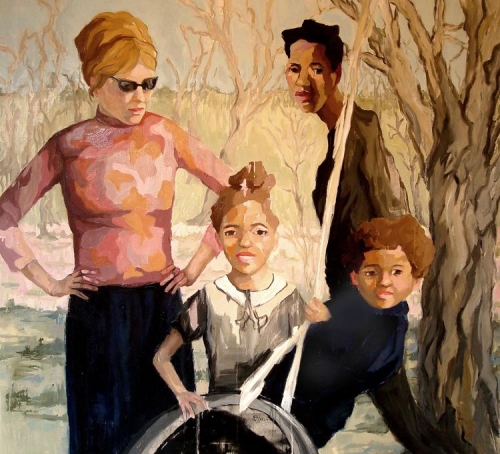 Now that her children have grown up and moved out of her house, doctor-turned-artist Ruth Owens has been feeling reflective.

A young man dating her daughter said she had a “good family,” an intended compliment that Owens found ironic since she grew up in what would not have been considered a traditional family in many communities.

Her white German mother and African-American father met when his army unit was stationed in post-war Germany, and cultural disparities seemed greater when they were in American states where mixed-race marriages had been illegal in the 1960s. Owens became a doctor and married a doctor. Their children look like all-American kids, hence the irony of looking back on the contrasts.

Many of her works in this show at The Front focus on where it all began: her Creole-German childhood in Augsburg and Heidelberg, Germany.

Her large painting, “Good Family” (pictured), of her and her mom, father and younger brother, says it all. Her mom watches over the kids and the group conveys a universal humanity that knows no boundaries.

“Swingtime” portrays a little girl lost in the swirling world seen from a swing, and Owens’ “David and Sweet Ann,” view of her brother and a childhood friend fleshes out a worldview that is normal yet filled with contrasts — as we also see in a film Owens crafted from her parents' early home movies.

It’s a grab bag of visual experiences that segue in almost dizzying leaps among places, peoples and times.

Her dreamlike scenes of Creole and white kids at parties celebrating events like Fasching, the German Mardi Gras, explore the contrasts between typical childhood joys and fraught cultural norms.

An adjacent gallery space features some quietly provocative, deceptively innocent-looking new works by Katrina Andry that are unlike the large, precise and socially incendiary woodcut prints for which she is known.

Nearby, a fascinating yet difficult to describe video collage by Porscha Danielle rounds out an expo that skillfully weaves empathy and challenge into an unexpected visual tapestry that transcends many traditional and perceptual boundaries.