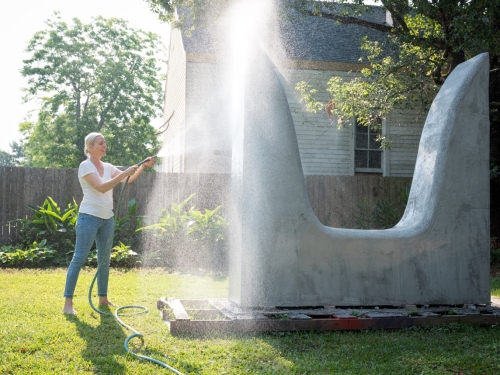 Seven artists have been commissioned to make new works on the subject of monumentality for this year’s edition of Prospect New Orleans.

Thanks to a $2 million grant from the Mellon Foundation, the works will be featured in a new curatorial section of the triennial, slated to open in October after being postponed from last fall.

“Monuments: A Proposal,” as the section is called, takes its name from one such project by sculptor Simone Leigh. The title for the artist’s planned work, which will be installed in downtown New Orleans, is meant to suggest the mutability of monuments. The director of Prospect’s fifth edition, Nick Stillman, says he hopes the exhibition can do the same.

“Maybe monuments shouldn’t be fixed. Maybe they are things that need to be ephemeral because we’re such a rapidly changing society,” he says. “I don’t think that feeling is going to go away anytime soon.”

The other artists working on commissions for the project are Adriana Corral, EJ Hill, Glenn Ligon, Dave McKenzie, Anastasia Pelias, and Nari Ward.

Though the details aren’t set in stone, Stillman offered a few specifics. Ward will create a mobile artwork mounted with a police siren, while McKenzie plans to erect a memorial to his recently deceased father. The most ambitious project may be Hill’s, for which the artist plans to repurpose a local ferris wheel for a participatory artwork.

All seven artists were planning to address the idea of public statuary when the organization applied for funding through the Mellon Foundation’s Monuments Project, a $250 million grantmaking initiative launched last year.

An additional $500,000 will come from the Open Society Foundations, George Soros’s philanthropic organization that funds projects related to human rights.

“When we stepped back and looked at the big picture of these proposals, [we realized that] they are all kind of new, very contemporary conceptions of monuments or memorials,” Stillman says. “That’s when it became clear that there was a theme emerging and happening completely organically.”

One of the central directives of this year’s triennial, say curators Naima J. Keith and Diana Nawi, is an investigation into how New Orleans has changed since the first triennial was organized in 2008.

Back then, four major Confederate monuments stood in the city, including a particularly infamous bronze statue of General Robert E. Lee atop a 60-foot-tall plinth downtown. Today, all four statues are gone.

“There’s still work to be done,” Stillman says. “The role that Prospect can play in that work is to elevate contemporary artists to the point where they’re able to propose new visions for monuments.”