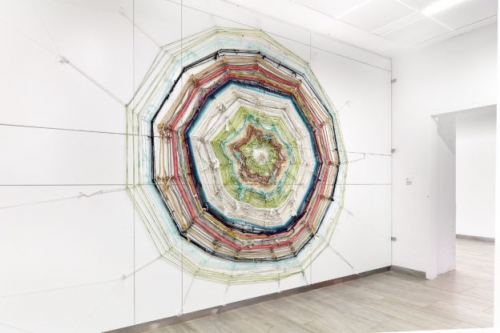 In March of 2017, a man in Massachusetts filmed two dozen wild turkeys walking in a perfect circle around the body of a dead cat in the street in front of his house. The resulting video of the looping landfowl quickly became a viral hit, its popularity fueled by the eeriness of the scene and its irreconcilability with what we think of as typical turkey behavior. It captured what appeared to be a spontaneous emergence of order.

Much like the bird experts who were called in to make sense of the turkey video on radio and television news segments, the artists in Spontaneous Emergence of Order use scientific rigor to deepen our understanding of the natural world and humans’ relationships to it. For Tanya Chaly and Richelle Gribble, this often involves processes not so different from those used by field researchers to catalogue and categorize flora and fauna, with particular attention to how both have been impacted by human behavior.

Where Dukiewicz illustrates natural cycles at a microscopic level, Richelle Gribble takes the macro view, with sculptural installations that track large-scale changes in landscapes and behaviors. In many of her recent works, she isolates the strange sense of order that can emerge in the midst of environmental upheaval, underlines the oddly organic patterns formed by human activity, and offers visual representations of the anthropocene, a term that refers to our current geological age, which is defined by the effects of human activity on the planet. Gribble’s work neither aestheticizes the effects of human exploitation and development on the planet, nor oversimplifies the processes that fueled these anthropocenic changes.

Richelle Gribble explores the interdependence of life at all levels of living systems – organisms, social systems, and ecosystems. Her work reveals the striking similarities between the structural patterns that occur in our social, biological, and technological networks, blurring our world into one integrated system. Richelle poses an important question: how does connectivity, for better or for worse, influence our lives and our future?