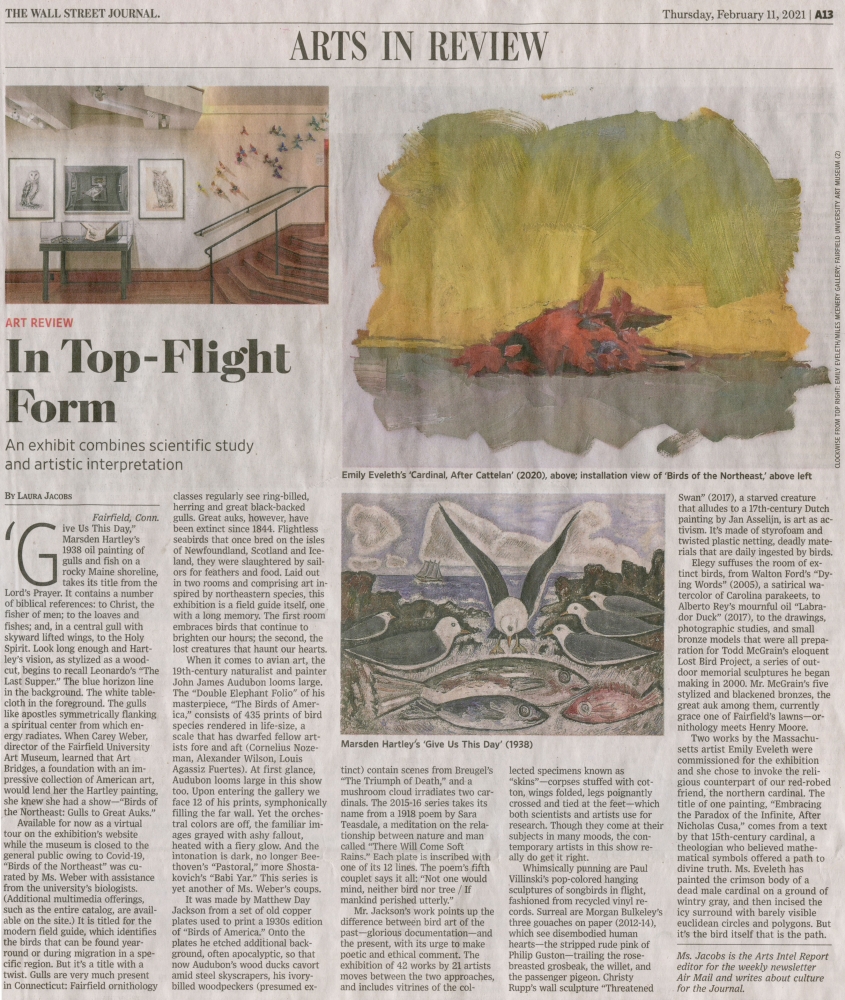 ‘Give Us This Day,” Marsden Hartley’s 1938 oil painting of gulls and fish on a rocky Maine shoreline, takes its title from the Lord’s Prayer. It contains a number of biblical references: to Christ, the fisher of men; to the loaves and fishes; and, in a central gull with skyward lifted wings, to the Holy Spirit. Look long enough and Hartley’s vision, as stylized as a woodcut, begins to recall Leonardo’s “The Last Supper.” The blue horizon line in the background. The white tablecloth in the foreground. The gulls like apostles symmetrically flanking a spiritual center from which energy radiates. When Carey Weber, director of the Fairfield University Art Museum, learned that Art Bridges, a foundation with an impressive collection of American art, would lend her the Hartley painting, she knew she had a show—“Birds of the Northeast: Gulls to Great Auks.”

Available for now as a virtual tour on the exhibition’s website while the museum is closed to the general public owing to Covid-19, “Birds of the Northeast” was curated by Ms. Weber with assistance from the university’s biologists. (Additional multimedia offerings, such as the entire catalog, are available on the site.) It is titled for the modern field guide, which identifies the birds that can be found year-round or during migration in a specific region. But it’s a title with a twist. Gulls are very much present in Connecticut: Fairfield ornithology classes regularly see ring-billed, herring and great black-backed gulls. Great auks, however, have been extinct since 1844. Flightless seabirds that once bred on the isles of Newfoundland, Scotland and Iceland, they were slaughtered by sailors for feathers and food. Laid out in two rooms and comprising art inspired by northeastern species, this exhibition is a field guide itself, one with a long memory. The first room embraces birds that continue to brighten our hours; the second, the lost creatures that haunt our hearts.

When it comes to avian art, the 19th-century naturalist and painter John James Audubon looms large. The “Double Elephant Folio" of his masterpiece, “The Birds of America,” consists of 435 prints of bird species rendered in life-size, a scale that has dwarfed fellow artists fore and aft ( Cornelius Nozeman, Alexander Wilson, Louis Agassiz Fuertes ). At first glance, Audubon looms large in this show too. Upon entering the gallery we face 12 of his prints, symphonically filling the far wall. Yet the orchestral colors are off, the familiar images grayed with ashy fallout, heated with a fiery glow. And the intonation is dark, no longer Beethoven’s “Pastoral,” more Shostakovich’s “Babi Yar.” This series is yet another of Ms. Weber’s coups. It was made by Matthew Day Jackson from a set of old copper plates used to print a 1930s edition of “Birds of America.” Onto the plates he etched additional background, often apocalyptic, so that now Audubon’s wood ducks cavort amid steel skyscrapers, his ivorybilled woodpeckers (presumed extinct) contain scenes from Breugel’s “The Triumph of Death,” and a mushroom cloud irradiates two cardinals. The 2015-16 series takes its name from a 1918 poem by Sara Teasdale, a meditation on the relationship between nature and man called “There Will Come Soft Rains.” Each plate is inscribed with one of its 12 lines. The poem’s fifth couplet says it all: “Not one would mind, neither bird nor tree / If mankind perished utterly.”

Mr. Jackson’s work points up the difference between bird art of the past—glorious documentation—and the present, with its urge to make poetic and ethical comment. The exhibition of 42 works by 21 artists moves between the two approaches, and includes vitrines of the collected specimens known as “skins”—corpses stuffed with cotton, wings folded, legs poignantly crossed and tied at the feet—which both scientists and artists use for research. Though they come at their subjects in many moods, the contemporary artists in this show really do get it right.

Two works by the Massachusetts artist Emily Eveleth were commissioned for the exhibition and she chose to invoke the religious counterpart of our red-robed friend, the northern cardinal. The title of one painting, “Embracing the Paradox of the Infinite, After Nicholas Cusa, ” comes from a text by that 15th-century cardinal, a theologian who believed mathematical symbols offered a path to divine truth. Ms. Eveleth has painted the crimson body of a dead male cardinal on a ground of wintry gray, and then incised the icy surround with barely visible euclidean circles and polygons. But it’s the bird itself that is the path.

—Ms. Jacobs is the Arts Intel Report editor for the weekly newsletter Air Mail and writes about culture for the Journal.