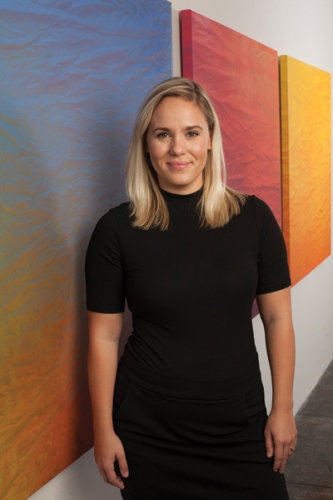 Paint is artist Bonnie Maygarden’s main medium.  Through paint, she also explores other media, such as digital photography and sculpture. Her vividly colored works look like they are generated digitally, but are completely handmade. Some have a trompe l’oeil three-dimensional quality, yet they are painted on a flat canvas.

“We are so based in our online world,” says Maygarden. “One of the things I love about creating trompe l’oeil paintings is that they force people to stop and question what they are looking at.”

Maygarden’s love of art flourished early. The native New Orleanian studied art through Lusher Charter School’s Talented in the Arts Program, at New Orleans Center for Creative Arts and at LSU before attending Pratt Institute, where she earned her BFA in painting and drawing. When she returned to New Orleans from New York, she obtained her MFA at Tulane. She’s taught art at Tulane, Southeastern Louisiana University and The New Orleans Academy of Fine Arts. In 2016, she traveled to London to attend an artist-in-residence program sponsored by The Slade School of Fine Art and Camden Arts Centre.

Her style is influenced by both the photorealist and West Coast minimalist movements. Initially, she photographed her subject matter and then painted it as realistically as possible. As Maygarden experimented with the relationship between painting and digital representation and the value of one versus the other (“painting is traditionally perceived as more valuable,” she says), the work evolved. Her current process involves manipulating the surface of the canvas with folds and rolls to create a map for the image, then applying paint to the textured terrain.  Her paintings depicting crumpled masses of gold Mylar look like sculpture-in-the-round.

“In history, a painting was used as a window,” says Maygarden. “I like the idea of a painting feeling like an object within a space.”

Maygarden also uses the work to delve into other questions and ideas: how “materiality” (paint versus digital for example) affects our understanding of art, what connotes luxury, the effects of color, the magical way light interacts with the world around us and the beauty of natural phenomena. Some of her paintings evoke aerial photos of water and sand dunes.

“To arrest people’s attention for a few minutes is a challenge,” says the artist. “It’s also gratifying.”