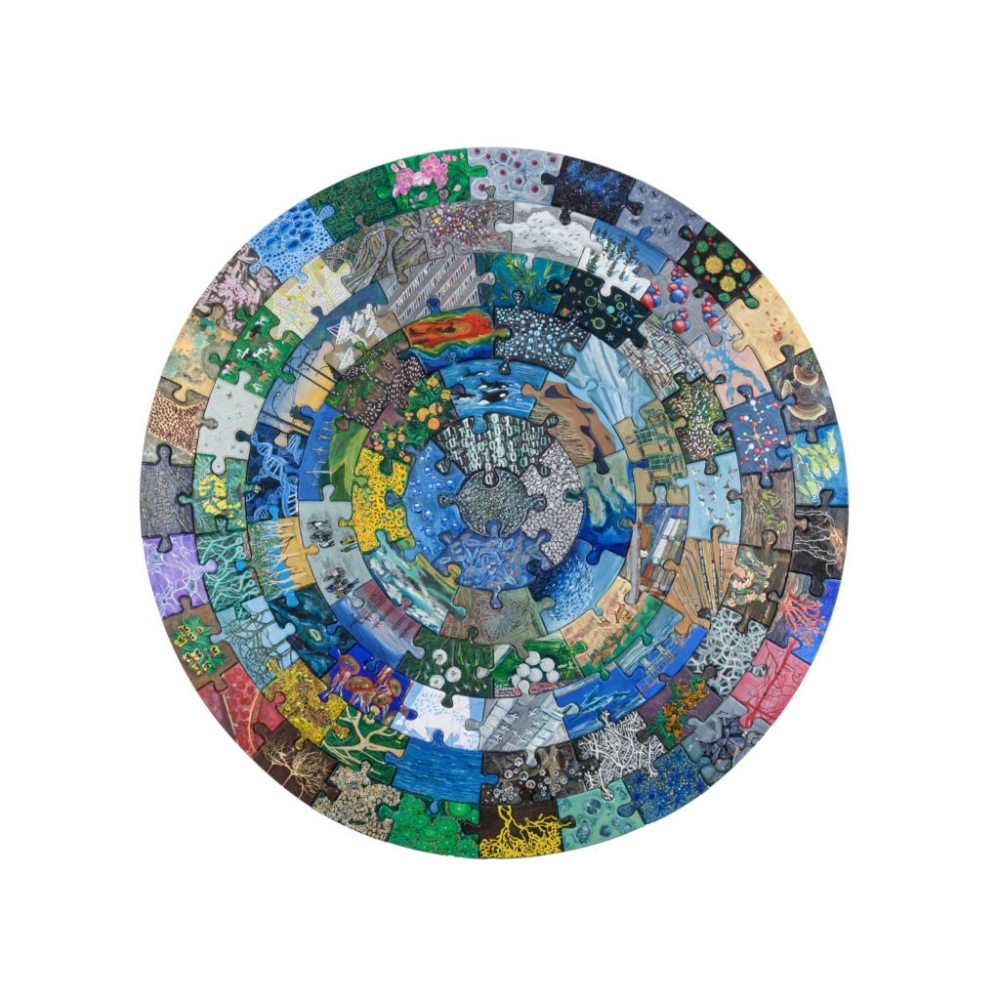 Shhh, don’t tell anyone, but most art shows aren’t that relevant to what’s going on in the world. It’s a pleasure, therefore, to find one that’s timely and right on the money. “Dear President” (billed as “An art show about important American issues”) opens Saturday afternoon at South Bay Contemporary in San Pedro and features nearly 50 artists both local and regional.

Curated by Peggy Zask, the idea for this exhibition originated prior to the recent Presidential election, back when Bernie Sanders was still viable and before Hillary Clinton and Donald Trump clinched their respective party’s nomination. And so, despite appearances, this didn’t begin as a “Dear President Trump” show. The same concerns about policies that will shape the future of our country would have been addressed to whichever candidate was about to take office. Somehow, though, the concerns seem more urgent with this particular victor.

Each artwork, and an accompanying letter written by the artist, focuses on an issue which many people care about, and these include climate change, military spending, gun control, immigration, criminal justice, education, and women’s reproductive rights.

A catalogue is forthcoming that will include both artwork and letters, to be mailed to the President as well as other government officials and members of the press. The rest of us will have to fork over a few bucks for our own copy.

Peggy Zask sums up her gallery’s latest endeavor: “These works of art seem to create and communicate a collective narrative, articulating who we are, where we come from, what we stand for and what we are against.”

Richelle Gribble in her studio. Photo courtesy of the artist

Among the prominent works in “Dear President” is a piece entitled “One,” and it’s by Richelle Gribble, who now lives in Redondo Beach. She was born in the small town of Idyllwild in Riverside County. She completed her art education at USC, headed up to Seattle for half a year, and then was accepted into a six-month art residency program at the Kala Arts Institute in Berkeley. Afterwards, she was accepted into another residency program, this one in Sausalito at the ICB Artists Association. She’s also been in many shows.

A few years back, Gribble gave a TEDxTrousdale talk with the title “What is Our Role Within a Networked Society?”

She has defined her creative focus with these words: “I explore life at all levels of living systems–organisms, social systems, and ecosystems–to examine and promote our interdependence.” And thus she poses the question: “How does connectivity, for better or for worse, influence our lives and our future?”

But let’s talk about “One” (2016), created with acrylic, oil pastels, ink and graphite on panel. I’m not sure if it spins like a vertical roulette wheel or requires a giant turntable, but “One” is circular and measures 84” across. Perhaps it’s enough that our heads may spin while looking at it.

“It’s a giant round jigsaw puzzle with 91 puzzle pieces,” Gribble says. “Each puzzle piece represents a different network on earth that connects us to each other.”

These networks are social, biological, and technological.

“So it’s basically kind of building out, showing the building blocks of life on earth. Then it kind of explodes into all these puzzle pieces showcasing various technologies, most of it green technology. I’ve also got different scenes of wildlife and plants and animals to showcase how they’re co-dependent in this web of life.” Additionally there are bits of geography and images of people because, after all, we’re a crucial aspect of the mix too, aren’t we?

Richelle Gribble’s “Dear President” letter clearly has Donald Trump in mind: “After following your views on globalization and climate change, many of us hope that you perceive these challenges in terms of connectedness instead of nationalism.” More pointedly, she adds, “Recognizing the links that bind us together is both obvious and imperative to our collective survival and foreseeable future.”

Sitting across from one another, we continue to talk about “One” and what it implies.

“I felt like this piece was very relevant to the ‘Dear President’ show,” Gribble says, “because it’s showing the unity of all facets of life and how [Trump] needs to acknowledge how everything influences one another, for better or worse. We need to be able to have this overview effect of how it all connects, kind of zooming out and seeing what the world is as a whole instead of viewing it in separate parts–which is kind of how Trump views it, America as a separate entity and not necessarily connecting it to the bigger picture.”

Assembling one large interlocking work out of 91 jigsaw puzzle-like paintings and illustrations clearly requires some forethought.

“When I began,” Gribble says, “I had a general idea of what I wanted to include, and in my sketchbook I wrote down as many networks as I could think of. So I have a list of probably 200 or 300 different things.”

A network is a series of patterns, most of them crisscrossing like eels in a basket, and thus ranging from veins on a leaf to a freeway interchange. And even though Gribble had her list of subjects, there was always a little wiggle room for the spontaneous, which I think is how a cluster of dandelions wound up near a cluster of satellite dishes, and in the bargain proving that certain networks are compositionally similar even if their origin and purpose are miles apart.

“I painted starting from the outside into the center,” Gribble explains. “In my studio I had dozens of puzzle pieces scattered on the floor and on the walls and it wasn’t until I assembled them at an art show that I actually saw the full picture. In my process I always like an element of surprise, which is good and bad.”

But mostly good, thinks this writer, as when Gribble allowed herself “to go off-script.” For example, “If I really enjoyed painting water as I illustrated dolphins then I did another ocean scene of waves; that’s another network.”

“One” is therefore reminiscent of an aerial view that shows a village from 20,000 feet. There’s the overview, of course, but only when we zoom in do we see and appreciate the individual components of which it’s all comprised, such as fire hydrants and mailboxes.

As we inch closer to the presidential inauguration on January 20, all eyes are being drawn to Capitol Hill. What are we in for? In this past Sunday’s L.A. Times, Doyle McManus wrote that “Trump comes to the job with the habits of an entrepreneur and a showman, not a manager of large organizations.” One might sum up the job requirement like this: For our leader, we don’t need a businessman or a politician, we need a statesman, and to succeed as a statesman one must be a master of diplomacy. Diplomacy is a fine art, requiring patience, temperament, intelligence, and understanding. Does the person we’ve elected to guide our country have these qualities? At the very least, “Dear President” speaks as a concerned voice, and presumably implies that those in power will be held accountable for their decisions and their actions.

For people in the arts, it’s drawn them into a sphere they may not have anticipated.

“I’ve never been necessarily a political artist,” Gribble says. “I’ve just sort of let my entire artistic message evolve out of where my gut impulse is. But it’s taken me to this tipping point of learning about networks to promote our social and environmental interdependence. And with that I’m forced to look at our policies that protect and help assist our environment and how that impacts social groups. So I think I’m being nudged toward politics in my work.” She considers this for a moment and laughs. “That’s an interesting place to be.

“I recently watched this brief interview with Nina Simone,” Gribble continues, referring to the late singer. “She was saying that in her mind the role of the artist is to reference what is relevant to the time. And she says all artists have this obligation and responsibility to reflect the time, and I feel like I also have that responsibility. During Obama’s administration I really felt that my voice was reflecting the general mindset of America, because when he’s your leader you kind of assume that everyone thinks this way in the entire United States.”

However, she adds, “When Trump was elected it [made me] realize that that isn’t how everybody views our planet and the impact of climate change.” The jarring contrast, Gribble says, between her beliefs and those apparently held by so many others across the country, was something of a surprise and wake-up call. And the result? “It gives me even more motivation to push my ideas forward and to contribute to the dialogue of our planet’s evolution.”

If we use “One” as an analogy, it’s as if the artist now realizes that some of those 91 pieces are in danger of being removed or altered, potentially throwing off the alignment or balance of the unifying threads and networks.

“I’ve been researching networks for the past six years,” Gribble says, “and people keep asking me Are you almost done, Are you going to change and work on another subject?

“Understanding our inner connectivity is kind of this lifelong pursuit,” she says, in essence answering the question. “Many people don’t really know the consequences, whether they be positive or negative, of living in such a connected world,” referring to globalization and rapidly advancing technology. “Through my art, I’m making an effort to comprehend where it might be taking us. I have a feeling I’ll be learning about this subject until we culturally catch up to it and understand what connectivity is in the 21st century, or even beyond that if it takes us that long to learn.”