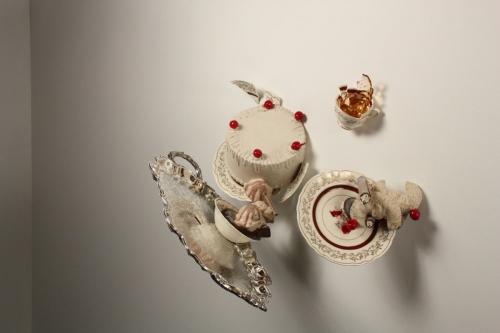 Dirk Staschke (b. 1971) touched clay for the first time in the second grade, while attending an art school class in Huntsville, Alabama. The Earth didn't shake, nor did he find his peace. For the young Staschke, clay was nothing special -- yet. Since then, things have somewhat changed. Today, Staschke lives in Portland, Oregon, where he works as a ceramic artist.

His recent body of work explores notions of gluttony and cultural excess. Piles of cakes and pastries, inedible meals that are beautiful but simultaneously disgusting.

When he told me about his background, the events created a series of movie scenes in by head mixing in The Warriors (1979) and Interstellar (2014).

Staschke's father was a son of German immigrants. He was raised in Chicago and became and aerospace engineer. Staschke's mother was, as Staschke himself puts in, a frustrated artist who dropped out of art school to marry Staschke's father. Later Staschke's father went to work for NASA and they settled in Huntsville, Alabama, where the artist spent his childhood.

"It seemed like my friends and I were always having to defend ourselves," is his answer when I ask how it was growing up in Huntsville. He continues with a story including 50 people running after 35 - with baseball bats. Staschke was one of the 35. On that night several people ended up in the hospital.

"Anything out of the norm was considered threatening to most people in Alabama back then. In retrospect, it is completely insane that something as simple as a haircut or an earring could have potentially resulted in death. Enduring that sort of craziness pulls people together and I'm still close with my old friends. It also explains a reason I might laugh a little when I see five-year-olds with Mohawks."

Like his mother, Staschke thought he would become a painted one day. He got a painting scholarship to the University of Montevallo to pursue his plans.

At Montevallo, clay seeped back into his life and after his first ceramic class, Staschke knew it was what he wanted to do. Ceramics didn't give him only a surface, but also the addition of form. It challenged him to think how the two things would interact.

He also admits he simply has a love for things that are hard to do. Working with clay is very complex - from the chemistry of clay and glaze, to firing a kiln.

"All of these variables can result in countless possible outcomes. The realm of possibilities that ceramics offers will last a lifetime."