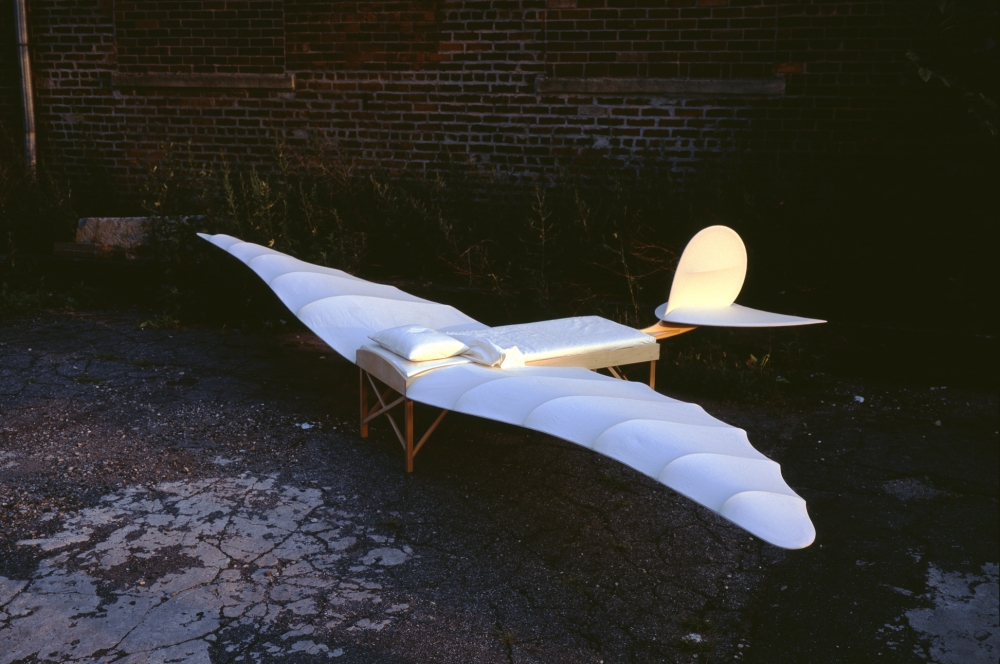 "Have you ever had a flying dream, one in which you gently float upward, and, moving at a leisurely rate, take a tour of the trees and rooftops of your neighborhood? Have you flown in your sleep, relaxed and comfortable, to the clouds overhead, passing along slowly enough to study your environs in detail from this bird's eye view, coming to see and understand this plot of earth in a new light?" - Paul Villinski

Flight has been in Paul Villinski's blood since before he was born. His father was an Air Force navigator: Villinski spent his childhood traveling from base to base, hearing the sounds of planes overhead and making airplane models with the other pilot's children. Villinski has been a paraglider pilot since 1999, and has flown his own sailplane since 2003. A painting of Villinski's from 1991 hangs above my desk, showing the tops of tree branches, a perfect crescent moon, cumulus clouds darkened to black by night, and at the top, a bird, its wings thrown back, which seems to alight from the tip of the moon.

In the early 1990s, Villinski transitioned from painting to making sculptural objects, at first by combining the two media in installation-type pieces. The sculptural works often are comprised of found objects - specifically old work gloves and beer cans. Beer cans are cut, meticulously, into tiny butterfly forms, suspended in relief from the wall, sometimes set against low voltage lights. Often grouped in clusters, the butterflies flutter gently with ambient breezes, casting their shadows against the wall. Lament (2001), is a wall sculpture made of black work gloves, sewn together to form two large wing forms, separated by a backpack frame. In these found-object works, meticulous craft, obsessive handwork and elegant clear form miraculously evolve from the gritty raw elements that comprise them. This transformation is at the heart of Villinski's work - a search for pristine perfection, often completely at odds with its initial inspiration. Villinski found his first work glove at a Japanese internment camp in Wyoming. The beer cans come from the industrial, littered streets of Long Island City, his neighborhood in New York. The material is also completely at odds with the form: What does a work glove have to do with a wing? What does a beer can have to do with a butterfly? Yet somehow in the completed work, these permutations are totally convincing, as if we had dreamed them up ourselves.

Dreamer (2003), a sculpture comprised of a miniature turned-down bed from which large, cloth wings and a tail extend, was created after September 11th. Villinski thinks of it as representing solace-a bed for a childwhere the dream of flight is literalized. But here that perfection of craft, whiteness, perfectly arranged flat bed and single pillow seems strangely clinical, like a hospital bed. There is sadness in this white, empty bed, perhaps a reminder that the devastation of that day actually began in flight. The dream is the pleasant, exciting, freeing one of flight, but also one tinged with melancholy.

Opposing emotions converge in Villinski's 'flying machine' pieces. Spinner (2001), is a helmet, on top of which is attached a functioning engine and full-size wooden propeller. Sortie (2004), is another helmet from which tiny, motorized model airplanes extend from a web of straight and curling wires. They are the toys and flying machines a child might dream up and play with (like those old felt beanies with propellers) - but only a sophisticated practitioner could actually construct so finely. The child might hope and dream such a device could take him aloft; the adult makes the machine despite knowing better. Villinski was that child who, upon finding such a toy-a molded-plastic backpack attached to a helicopter rotor-actually strapped it on, went outside, and attempted a series of hopeful leaps.

The merging of aesthetics and science, often in unexpected ways, characterizes his sculpture, and also accounts for its quirky and inventive quality. In almost all of Villinski's works, the hand-crafted meets the motorized or the kinetic. His objects invoke a contradiction between motion and stasis, between the quietude of an elegant design sense, and the possibility that these things might just take off. We feel the child inside who tinkers, who wants to speed along the road and dreams of flying, we feel the scientist and the mechanic who engineers the machine, and of course we feel the artist as magician who puts it all together and creates convincing, surreal, poetry of form.