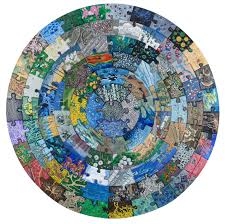 Deborah Brockus, director of BrockusRED, has choreographed DUST: Permutations of the Unknown In collaboration with visual artist Richelle Gribble, and composers Peter Askim and Zac Greenberg for three performances at Ivy Substation.

The performances are accompanied by a Sustainability Plastic Replacement Fair with leading companies and organizations at the Ivy. Brockus follows performances on DUST with Women Rising: Choreography from the Female Perspective at Ford Theatres on August 16.

DUST is a dance multimedia work exploring the patterns in nature and humanity of our time with a focus on the monster of plastic of our own creation that is overtaking the ocean, and eventually our species. Annually, four to twelve million metric tons of plastic enter oceans enough to cover every foot of coastline. Every minute we make plastic one million bags; the amount of oil it takes to drive a car a mile, is the same amount to make just 14 bags. Americans alone use 100 billion bags per year: 12 million gallons of oil. Time Magazine said that "Americans eat and inhale over 70,000 plastic particles each year."

DUST starts as its base historical writing of ancient and past civilizations to create a different perspective on the current crisis of environmental loss. The work asks these questions: Are we the keepers or rulers of earth? Is our hubris is leading to our destruction? What and how quickly can we learn about our place in the ecology to change our fate?

"Inspiration and lessons from our natural environment have influenced mankind since our beginning," said Brockus. "In 1686 Isaac Newton presented this third law of motion: for every action (force) in nature there is an equal and opposite reaction. No system in the natural world works in isolation or is unique -- energy and matter do not disappear but rather reform.

I am creating DUST to be an uplifting journey through nature on earth and human thought with a focus of the laws and patterns found in nature and the ability to recover recycle and heal. We know that the earth will be fine in the long run - but if humans want to survive we will need to make some changes fast.

This question hangs over my thoughts: When does plastic become dust?"