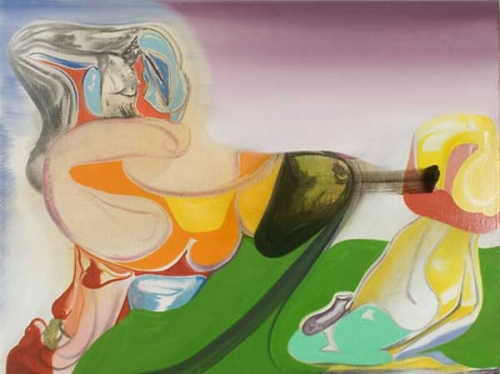 At D’Amelio Terras, Elliot Green, the perfectionist, low profile G in the longtime collaborative triplex, Team ShaG (comprising also the highly visible David Humphrey and Amy Sillman) is showing paintings in New York for the first time since 2003.  The hiatus may indicate that Green’s antic comedy of gestures, newly breezy and following upon a solidified, cartoonographic style, has been hard won.  But if the paintings’ touch has changed, their improvisatory premise hasn’t; a time-lapse video shown at Postmasters in 2000 seemed aimed at viewers, conditioned by pop and conceptual painting, who would put Green’s cart – precision screwball – before his horse: an animating coagulation of squiggles, feints, wipes and golem parts.  Green’s engagement with comics and cartoons – call it the comicartoon – is thus the reverse of tough mannerists like Joyce Pensato or Peter Saul.  Where they beat a cheap silk purse into leathery sow’s ears, Green coaxes his contending gestures toward the comicartoon’s gleaming, gimcrack lucidity; if only he might stumble upon some farce of sex, animus and style foretold by Betty Boop or Gerald McBoing Boing.

Green’s current paintings supplant his earlier “limited animation” mock-mayhem with the saturated glazes and rendered anatomies of a Golden Age chipmunk fable.  Humility at the Landfill (2008) and Rainbow with Eclipse(2009) evoke old color televisions aglow with putting green-shaped washes of dry glaze that don’t quite register at the edges.  In these gaps a wormy riot of “personified abstraction” – Green’s show title – gets a vital foothold, every squiggle threatening to come alive with chrome highlights.  Flesh Meets Mist (2009) exquisitely can’t cohere into the melodrama it dimly remembers, as if De Kooning in his lyrical senescence were painting Elmer Fudd as Siegfried.  Lemony Soap (2009) becomes a Tom and Jerry Show of speedy automatic gestures warring with hidden faces on a vast, tricky Road Runner mesa.

The classic animations Green’s new work calls to mind were luxuries of common-coin professionalism—think stone tracery and masons’ guilds.  Among the fluent inkmeisters of the funnies and animation studios, an idiot-bastard-son version of “mastery” had come to repose, that value long discredited by incurable Victorian and Beaux Arts decadence and subject to Modernist revaluation. Green’s soft, sad hues of Arcadian twilight suggest something like this sublimated history; that the comicartoon is a tombstone — but that surrounding it a lost Claudian Eden strangely persists by a mournful comedy of zings and ricochets.  Seriously folks.

Green’s comicartoon humor is meditative and self-inflicted compared to Mr. Saul’s recently shown Better Than De Kooning, an absurdly solidified, excruciatingly plastic version of an AbEx pile-up.  Saul is not a cartoonist, but he plays one in the art world and this painting seemed of a species with hilarious screeds from the rapidographs of Spiegelman, Clowes, and Crumb, chip-on-the-shoulder revenge fantasies upon arty pretentions from hard-working lonerswhoknow how to draw! What Green brings to the disputa between High and Low is the exquisite draftsmanship, actually, that De Kooning, Guston, and Pollock, etc. would self-deny.  One senses that Joanne Greenbaum in the gallery’s other room, or Carroll Dunham, or the other members of Team SHaG are exemplars of this tough-guy lineage, rebels against their own proficiency.  For them, beauty is, to pilfer the phrase, an invisible dragon; it can be located only with blind lunges and swats, from a dull sword if necessary.  Green, by contrast, seems incapable of winning ugly.  This is the limitation of his work, its flaw.  Is Green missing the point by being too tasteful?  If so, let us be as contented as Osgood Fielding III: after all, nobody’s perfect.