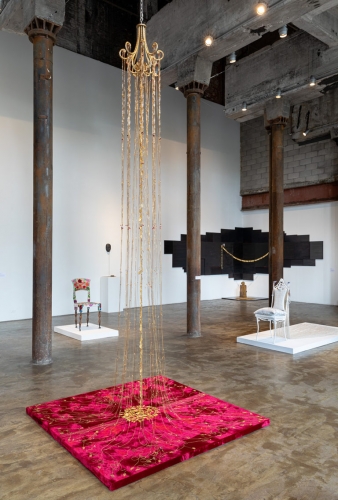 Installation view courtesy of Smack Mellon and the artist.

Colombian-born artist Esperanza Cortes is the originator of the strong show “Cante Jondo” (“Deep Song”), composed of a series of works, mostly sculptures in the form of decorated chairs; chandeliers, and embellished skulls. She brings attention to the colonial practices that so badly damaged the indigenous peoples of her region. Decoration is key to her sensibility, in the form of artworks that address the problem of colonialism indirectly—likely because literalism in regard to the travails she describes would limit the emotional power of what she does. To jump from a beautifully decorated chair to the severe problems still experienced by native peoples in Colombia is a way of evading the literalism that plagues much political art today—if the references are obscure, we are forced to complete the metaphor, surely a particularly effective means to understanding the suffering Cortes obliquely refers us to.

The problems suggested in this show have to do with the generations-old gems conflict still alive in Colombia. It would make sense, then, for Cortes to embellish the chairs with a gold chain and other seemingly valuable baubles—it is a way of referring to the difficulties there without making them too overt in her art. This means that the backstory of each work is important to know—a requirement that may be difficult to internalize as Cortes’s audience moves from piece to piece, but at the same time forces us into a position of political recognition, which is needed to fully appreciate the art. In the several examples taken from the 2016 series called “La Minera,” long gold or silver chains cascade downward from the clay heads of women the artist has sculpted. These heads represent the Afro-Colombian gold miners, mostly women, whose lands are now being taken by the Colombian government—this despite the fact that the miners have lived there for generations. Eerie, ghostlike, and somehow representative of the suffering these women continue to endure, the heads represent the depredations of history—if, indeed, we know what they represent (the situation is clarified with a wall card).

To summarize: this powerful show attempts to transform the brutalized, brutalizing history of those in power in Colombia as they attempt to wrest away the goods and lands of people there. The situation is tragic but maybe unnegotiable; it is hard to say from the work itself. Thus, the entire show becomes a melancholic elegy—likely, all elegies are melancholic—for the losses sustained by Colombian minorities. As such, it gives us a tragic, but also beautiful, sense of social meaning at a time when art is rife with such an outlook. But this show, despite the ubiquity of politicized intention in art., stands out for its specificity of theme and materials. Its particularity made it a pleasure to see.