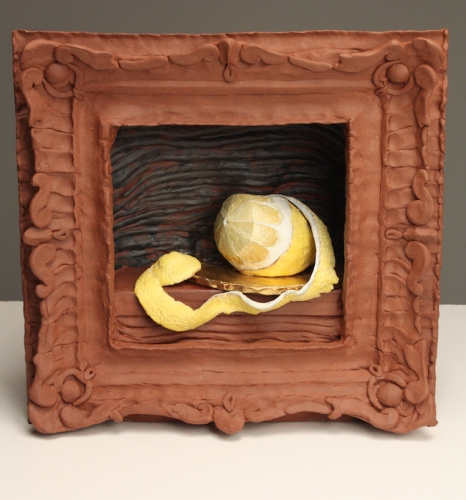 This is Dirk Staschke’s second exhibition with Winston Wachter Gallery in Seattle (the gallery also has a space in New York). Executing Merit (March 3 – April 15, 2105), a paean to the craftsmanship and recognition of death as part of life from the vanitas paintings of the 16th and 17th centuries, could easily have been consigned to “so what category.” Yes, the craft is extraordinary but if they had been nothing more than frontal attacks on the paintings and mounted on the wall, the exhibition would have failed. Craft alone is rarely enough.

But Staschke did something imaginative and unique, he turned the 2D into 3D; the paintings stand in the round on pedestals. The front is ravishing and sets the scene but it is the back with its muscular urgency that gives the work energy and rawness that justifies his play with the preciousness of the vanitas still life images he has converted into relief sculpture. The dialogue between front and back is often dynamic and perverse, cutting the stylish elegance with a visceral reality.

Vanitas is associated with still life painting in Flanders and the Netherlands in 16th and 17th centuries although practiced elsewhere as well. Also it is close to the schools of Danse Macabre and Momento Mori. The tittle comes from the term vanity and speaks to the transient nature of wealth and beauty, all soon enough to be swallowed up by death. Its common themes include butchered meat, food, rotting plants and flowers and insects eating at perfection. The peeled lemon was a regular image as well, alluding to the bittersweet qualities of life.

Above all it allowed painters to display the most virtuosic, near realist, trompe l’eoil skills. In recent years there has been a great deal of contemporary interest in this period of work at a time when, paradoxically, death is viewed more fearfully and resisted more strenuously than it was in the 16th century.

As the gallery states Northwest ceramicist Dirk Staschke likes to blur boundaries. His work teeters between a wink and a smile and serious contemplation about the value of art. His latest body of work, Executing Merit, takes pleasure in forcing us to look behind the curtain, at the less-attractive process of creating beautiful sculptures.

At first glace his works are refined homages to traditional still-life paintings, complete with ornate frames. As you move around, you get a full view of the work and the process involved in creating them. Unfinished clay bunches and bulges together to support the carefully detailed fronts. Staschke asks us to consider what part medium plays in the value placed on a work of art, and if knowing the process to create it adds or diminishes to that value. Such weighty questions might feel somber, but Staschke’s playfulness and sense of humor make the task pleasurable.

This is an ambitious project that Staschke pulps off with aplomb. We have watched his skills of mimicry grow from body to body of work for a decade now and they have dropped their slightly candy-sculpture feel (as though he was working with marzipan) and now his mastery leaves him free to play with content.

I am not sure how I feel about the use of actual wood frames, Maybe they undress the sculpture slightly, real unmasking unreal (or vice versa) and I do prefer those times when the frame is ceramic as well. My favorite work is handmade, perhaps the less theatrical of the group process-wise, and I enjoy its conceit of creating a coarsely modeled piece with the exceptional lemon standing out starkly. Less could become more. But these are quibbles about an excellent boy of work.

Lastly, there is Confection. It has nothing to do with vanitas aside from the food connection. It is well-titled, as the artist appears to be taking a break from death and simply enjoying himself. If it is some kind of ode to painting then it must be a homage to Wayne Thiebaud’s delicious canvasses of fresh cake and butter icing.