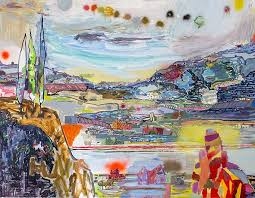 Jim Richard’s ninth exhibition at Arthur Roger Gallery brings together four of his former students—Cheryl Donegan, Amy Feldman, Wayne Gonzales, and Lisa Sanditz—to share the gallery space with him. It has the collegial feeling of a school group project, with the artists putting in their own individual contributions, but this is one where the teacher joins in too.

While Richard’s works focus on interiors, Lisa Sanditz’s paintings in the next room move outdoors, projecting the untamable forces of nature. Just as Richard’s pieces are filled to the brim with material objects, Sanditz’s are crowded with thickly-painted brushstrokes, her bright colors oozing over the canvases. In Fumigation Tents, 2016, Sanditz ushers viewers into a landscape—seemingly untouched by humans except for the appearance of luridly-striped termite tents—an imaginary realm that feels both timeless and placeless.