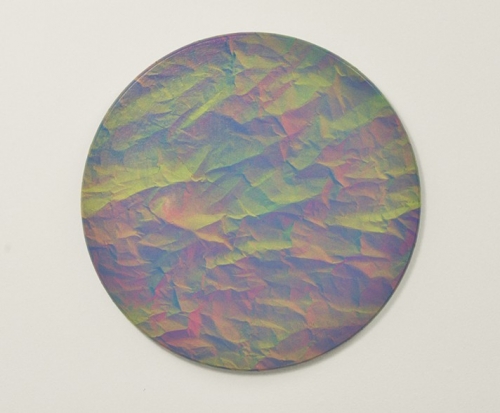 Bonnie Maygarden's new work “Virtuous Reality”, which will be opening at The Front on Sat., Sept. 14, is the kind of collection that will keep the conversation going long after Filthy Linen Night has faded into Sunday morning. Her ability to play with shadows in order to create the illusion of folds and ridges, distorts the reading of the image in such a way that it will keep you fixated on each piece.

With each image, Maygarden wants to the viewer to wonder “Are these paintings,” and “How were these paintings made?”  It is a question that viewers will have fun mulling over as they sip some wine and discuss it with friends and strangers alike.

Bonnie Maygarden was born in New Orleans and is a NOCCA grad.  She would go on to graduate from Pratt University with a BFA in Painting and a minor in Art History. She returned to New Orleans in 2010, and is currently enrolled in Tulane’s graduate program for a MFA in Painting.

Maygarden plays with the role of painting in a highly digitized, mass-produced world.

"There is a fascination with newness as well as the disposable quality of our visual culture that feels disjointed from the tradition of art," she said.

With her current works, which are created by hand yet emulate work that have been created by technology, she calls upon the viewer to “question their perception and expectations of the painted image.”

Maygarden currently has art hanging in the Big Top after participating in the “Presence” exhibit last Saturday. “Virtuous Reality's” opening at The Front will be from 6-10 this Saturday, September 14th, and will be hanging there until October 6th.  She also has a second opening on Filthy Linen Night in Booty’s Bywaterloo series, which is an extension of her work hanging in The Front, called “Virtuous Reality 2.0/Full Body Immersion.”

The piece in Booty’s plays with the same color theory and effect of light in painting, as you are completely immersed in the work, which is lit by a black light. The shadows and colors project in such a way that you have to fight the urge to touch the piece to make sure it is flat.

Whether you prefer to spend your Saturday night looking for aesthetically pleasing art or high-concept pieces that will bleed into your Sunday brunch, Maygarden’s work won’t disappoint.