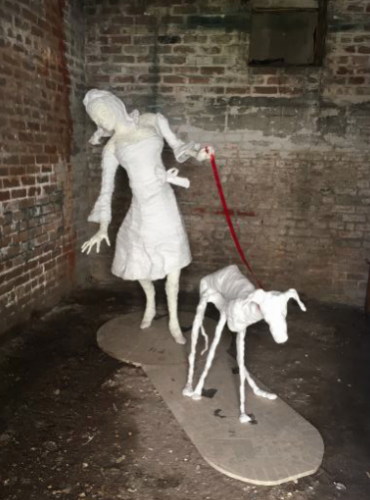 THE PAST OF human life casts a long and constant shadow on the present. Oftentimes, this passage of time is documented through photographs. Hence, family photographs lay the groundwork for a series of alla prima paintings and photo silkscreens in Ruth Owens’ “Conspiracies” at Barrister’s Gallery, as well as for her installation “White Specter” in an adjoining grotto. Of all the pieces on view, “White Specter,” a clay, wire and gauze sculptural installation, is the most successful in conjuring an aura of the past into the present with a jaunty woman decked out in a Sixties dress and hairdo walking a hound. “White Specter” strongly evokes one of Kara Walker’s time-sensitive installations such as A Subtlety in which molasses-colored figures filled a defunct Domino Sugar refinery. The prototypes for Walker’s installation represent a sticky past, literally and figuratively, just as there’s a strong sense of complexity inherent in “White Specter.”

Viewing any art exhibit cold is not unlike being introduced to someone for the first time. We wonder about their origin of accent, their profession, their age, and perhaps even their nationality since initially all we have is a name and a face. The same is true of an art exhibit. Without the artist, and without an 48 elaborate gallery handout, all we have are titles and appearances, much like a name and a face.

The title “Conspiracies” leads us to anticipate something peculiar and illicit. What, exactly, is never quite clear. From Owens’ website we learn that her mother was a White German and her father was a Black serviceman from the South stationed in Germany. Eventually Owens earned a Doctor of Medicine degree at Northwestern Medical School and for twenty years was a plastic surgeon in New Orleans, but a decision to dedicate herself to art led her to the University of New Orleans where she is currently pursuing an M.F.A.

A statement from Owens’ website asserts “this show is my most personal work yet in which I use my family’s photographic archive to explore issues of race, sexuality, family secrets, and perception.” This statement, along with her choice of plastic surgery and the show’s title “Conspiracies” leads us to infer that appearances were and still are important to Owens. That she was a child during the Civil Rights Movement, born in 1959 to a racially mixed couple, obviously impacted her sense of self. In this series of paintings of predominantly muted ochres, one cannot help but be reminded of the remote observations of Fairfield Porter, and the class-conscious ruminations of Eric Fischl. In the uneven dip- Ruth Owens: Arnold and Ruth, Augusta, GA, 1968. 2017. Oil on canvas. Barrister’s Gallery. 49 tych Eva and Ruth, Augusta, GA, 1968, Owens contrasts her very blonde, very pale mother Eva wearing a one-piece swimsuit opposite the artist as a little girl playing in the sand. Owens has used the diptych to create a division between mother and daughter. Arnold and Ruth, Augusta, GA, 1968 depicts a candid view of the artist as a pig-tailed girl next to a black man named Arnold who proudly displays a string of fish.

Using proper names in lieu of more personal references such as “mother” and “father” for titles, Owens sets a tone of separateness. In the four-part, screen-print on mirror Viewing My Parents, Owens uses half tone photographs of her parents as specimens, scribbling clinical notations to objectively describe the two parents’ differences in hair, lips and skin, as though these two human beings have been reduced to purely physical importance. Appearances will always play an important role in civilizations, not only to manufacturers of body products, but also to anyone who has to step into public scrutiny. We are in the 21st century, yet Robert Burns’ line still rings true. “Oh would some Power with vision teach us to see ourselves as others see us.”