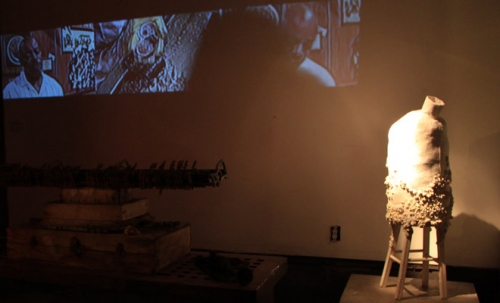 In a room alongside an outside bar is Anastasia Pelias' projected video, It’s Gonna Be Alright Baby, 2010. The work features Thomas, an oyster shucker, talking with the artist about the BP oil spill and its effects on the oyster industry. Thomas generally remains smiling and good natured as he looks past the camera at an offscreen television playing coverage of the oil spill, though at times he struggles to maintain his composure. This piece, perhaps more than any other in the show, transmits Otte's intent to make the show an international collection while reinforcing that Louisiana is equally contemporary and has the vernacular to view it as such.