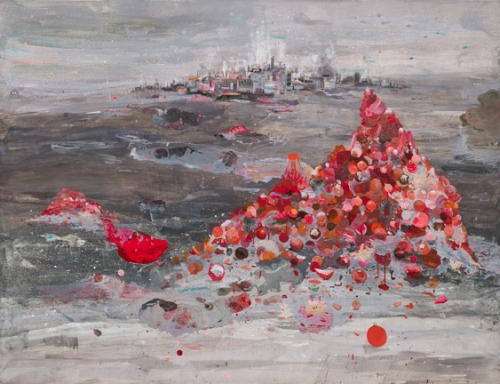 The effects of globalization may be everywhere, but that just makes them harder to depict. For her third solo exhibition at CRG, Lisa Sanditz presents an impressive suite of Large paintings based on a recent visit to China. Unlike contemporary representations of China such as Edward Burtynsky’s photographs or even NBC’s coverage of the 2008 Summer Olympics, which emphasized the regimented and orchestrated aspects of Chinese society, Sanditz’s paintings are Loose and expressive in their renderings of visual information.

Sanditz’s earlier interest in vibrantly depicting Landscapes and commercial spaces on the verge of gaudy disorder is transplanted in the current work to Chinese factory towns that specialize in the production of single objects: shoes, socks, VCRs, toys. The show’s remarkable opening painting, Christmas for Export (2007), features a heap of red Christmas balls in the foreground and a mottled gray city and sky in the back. In The World’s Largest Sock Market (2008), brushstrokes dangle Like socks hung in innumerable rows of display that recede into the distance.

In nearly every piece, Sanditz blurs the Lines separating commodity and debris, nature and environmental disaster. She does so with a palette that includes muddy greens and browns as well as vivid color applied in a style that ranges from an abstract wash to the precise illustration of detail. This approach continued in a room containing smaller gouache-on-paper versions that might serve as studies or close-ups. These related works augment the exhibition’s sense of (over-) accumulation, which Sanditz conveys less in literal quantity than in scintillating panoramas of unfurled paint and perspective.