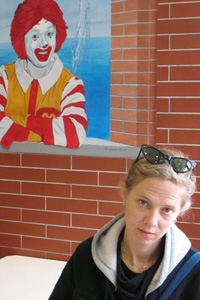 As pervasive as the painted landscape seems to be in the contemporary art world today, the problems inherent to the genre are as omnipresent as ever. Globalization and industrial pollution are just two destructive forces that have directly impacted both the built and natural environment. On both sides of the Atlantic, 19th-century landscape painting struggled with the deleterious effects of empire and industry. Today, we look back to Monet’s dappled, ruddy skies surrounding London’s Houses of Parliament as evidence of pollution’s early effects. A new age of conscientiousness has brought the landscape back into focus.

A native of Missouri, Lisa Sanditz has trawled the American Midwest, painting scenes of bucolic oddities from a chapel made of car parts to spelunking caves. In her work there is no hierarchy of sites, no singular place that represents best the excesses of modern life. If anything, the locales furthest from the consumer’s eye are what most intrigue the artist. Dylan’s final track on “Highway 61 Revisited” (1965) describes in short the experience of looking at the strongest of Sanditz’s landscapes:

“‘You’re in the wrong place, my friend You better leave’And the only sound that’s left After the ambulances go Is Cinderella sweeping up On Desolation Row.”

In ‘Christmas for Export’ (2007), passages of the painting are clotted with an impasto of unmixed acrylics, piling up petulant scabs of candied red that form a mound of shattered glass ornaments. The majority of the canvas is layered with a paint so thinned that it depicts the haziest of grey skies enveloping the post-industrial sprawl with a melancholic shroud. ‘New Mall in Shoe City’ (2007) is a disquieting picture of a commercial shopping centre leering towards abstraction. Both pictures are part of the artist’s new fixation with China’s manufacturing cities.

Lisa Sanditz is represented by CRG Gallery in New York; ACME in Los Angeles; and Galerie Rodolphe Janssen in Brussels. Sanditz earned her BFA from Macalester College in St. Paul, Minnesota, in 1995, and her MFA from Pratt Institute in Brooklyn, New York, in 2001. During the tail end of her first solo museum exhibition, which was held one year ago at the Kemper Museum of Contemporary Art in Kansas City, she made her first trip to China, an experience that has set her on a new path of work examining the relationship between the Chinese and American commercial landscape. Her next show is scheduled at CRG Gallery in the 2008/09 season. Currently Sanditz lives and works in New York City and Tivoli, New York. For more information please visit, www.crggallery.com/artists/lisa-sanditz.

STEVE PULIMOOD: Why are these locations in China of interest to you? Did you know that you were even going to make art based in China?

LISA SANDITZ: I went to China to specifically seek out these micro-economy, single-industry cities. I prearranged a number of visits to factories, but also discovered a lot more while I was there.

SP: Why China? Why not any other part of the world?

LS: Single industry cities interest me… Since I’ve moved upstate to the Hudson Valley, I’ve visited some of the post-industrial sites there along the Eerie Canal. Passing through places like the Rust Belt, Gloversville and Tannersville, which are single industry economies that are really ghost towns at this point, I started thinking about where those economies shifted and where they are flourishing. The more that I read the paper the more I realized that in terms of the American import economy we have such a strong relationship with China right now.

SP: There’s something about desolation in a lot of your works. It’s also about scale, encompassing large amounts of detritus. Was there something about your Chinese odyssey that had to do with scale?

LS: Seventy-percent of the world’s Christmas toys are produced in mainland China, and Yiwu City is among the largest of those production centers. I went to cities that had millions of people that a lot of Westerners have never heard of, so China is vast in every sense… In the end I tried to make some connection to the everyday objects that we use in our daily lives and going to the source of them: the pen you are writing with, a lot of the clothing that we wear, the vastness between source and consumer, the distance between that economy or that commodity and where it comes from.

SP: The specifics don’t interest you?

LS: No, I am not a statistician. But the quantity and the mass do…

SP: Related to scale, what about format? Will these compositions work in a vertical format?

LS: In addition to scrolls, vertical paintings are used a lot in Chinese painting and I have thought about how to have my paintings mimic or relate to that tradition. I’m sure I’ll do more vertical images as this Chinese project rolls along…

SP: Do the colours you are working with in this series have any relation to Chinese art?

LS: You can think of traditional Chinese paintings that are painted with ink and natural elements so the colour would be a lot more subdued and naturalistic. In these paintings I have used a more natural palette juxtaposed against a highly saturated, artificial colour. So in a sense I am combining that tradition of Chinese painting with a more contemporary painting tradition… I also like the collision of the traditional, natural landscape with the industrial landscape, which calls attention to the new and garish through colour.

SP: Do you see the challenges of the landscape tradition evolving, or as a constant set of problems applied to time and place?

LS: Maybe a little bit of both. America was founded on the concept of manifest destiny, real estate and land rights, which became the early subject matter of landscape painting. In a sense that subject matter is the same and the formal qualities changed over time, but on some level it’s a continuum. I’ve been thinking a lot about Thomas Cole’s “Course of Empire” (1836) paintings…

SP: You may know Ed Ruscha’s ‘Course of Empire’ (2005), which was installed in the American Pavilion of the Venice Biennale. The series are of industrial buildings inscribed some with his clever phraseology, others with intentionally indecipherable Asian letters, all under the series title which had political overtones given the political climate of their installation. It was somewhat formulaic, and derivative of his previous achievements. Are there signifiers in your paintings to let the viewer know that they are looking at China?

LS: As the landscape around us becomes more homogenous in terms of architecture or urban planning, even far flung spaces such as the image of a mall in China are now familiar. So how can a place have its own local flavour and characteristics but also incorporate this multinational component into it? That’s the turf that I am wrestling with… Some paintings have had Chinese characters in them, but my paintings are not language dependent.

SP: Landscape as a genre has always been resistant to any of these immediate signifiers.

LS: Which is maybe the problem people had with the Ruscha paintings: too much information and not enough for the viewer to experience on their own. Although the paintings are of specific places, I know that people don’t necessarily know or see what those references are but I hope that they function as some sort of infraction, obstruction, or decadence in the landscape which is natural, commercial or otherwise.

SP: As an American standing in America looking out into the world, do you see the pictures rooted in a very specific time? Landscape has also struggled with this problem as well… seeing the timeless American landscape as something that will always be there.

LS: And which as an ideal is always challenged by industry and technology. I am definitely interested in the here and now and bring those elements as awkward and ugly and undesirable as they may be into the paintings. So whether they remain fixed in this time period is uncertain… we’ll have to wait and see. We still look at Hopper paintings, we see the cars and the gas stations that are outdated, but they still have that timeless sense of the natural versus the artificial.