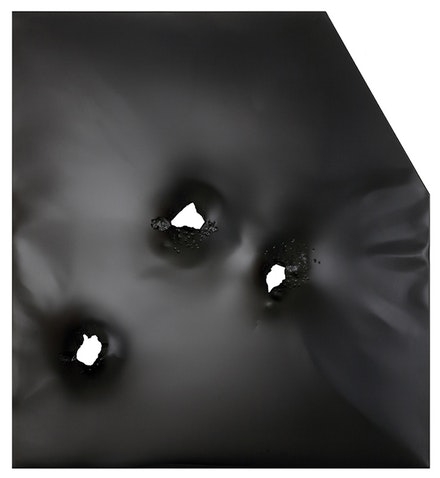 The title of Margaret Evangeline’s show was An Injured Armory. In this body of work, the artist, whose son served in the Iraq War, has turned to allegorical protest rather than specify the particulars of an actual historical conflict. So her exhibition, which was small but powerful, consisted of several stainless-steel panels that incorporated randomly spaced puncture holes, resulting from bullets fired by Evangeline herself at a military shooting range. The panels, some of which were covered with a thin layer of 24-carat gold leaf, were presented so that viewers saw the effect of the bullets’ exit rather than entry into the stainless-steel. The overall effect of Evangeline’s show, even if her audience did not know the personal tie she had with the Iraq War, is simultaneously troubling and moving. At the same time, the punctured openings belong to a long modernist tradition, beginning more or less spectacularly with the Italian artist Lucio Fontana, who in the mid-20th century slashed open his canvases to reveal the space behind the picture.

Fontana’s elegant cuts are a far cry, formally, from the jagged edges of the bullet holes in Evangeline’s work. It may be useful to speculate on why Fontana’s act of violence tends to be seen as a formal decision, whereas Evangeline’s work clearly refers to gunshots, thus pushing her aesthetic toward something more historical, more political. If today’s art culture is in fact one transfixed by the possibility of a political sublime, then Evangeline can best be understood as an artist who is abstracting violence, implying but not stating her own personal involvement in a conceptual sense. The works communicate both damage and loss—generalizing the problem of war in a way that lingers in the viewer’s mind. As a result, while An Injured Armory loses specificity in its generic approach, it actually gains resonance by refusing to particularize the conflict. This is a brave choice on Evangeline’s part—mostly because particularity tends to make an object more memorable, no matter what kind of motivation is responsible for it. But Evangeline’s allegorical orientation works. The tension maintained between Evangeline’s personal connection to the Iraqi war and the abstracted art she has made from such a tie intensifies her artwork in remarkable ways.

The works themselves are, in some ways, so direct, so free of any kind of ornament or activity beyond the bullet holes themselves, that they could well seem overly unassuming as art. But the simplicity adds to the directness of the works’ effect. “Sunday Morning I/Black” (2015) is a powder-coated, stainless-steel rectangular panel, whose long end rises vertically. On the upper-right, the panel has been cut slightly, so that there is a straight line demarking the edge at an angle. The triangular space, formed by the missing piece of steel, invests the piece with a bit of off-balance aesthetics, making it more complex, more challenging as an art object. At the same time, three bullet holes concentrate the tragic theme of the show—namely, that violence is more than an academic subject here; its consequences are deeply wounding in both a physical and metaphysical way.

Another piece, “I’ll Be Your Mirror Gold” (2013), is a full rectangle covered with gold leaf. The panel itself is gorgeous, reflecting light in the most fulsome way. But in conversation Evangeline warns that the gold leaf is not meant to be permanent—such are the conditions of life, especially in the military. The notion of vulnerability to violence—the idea that death is always a presence in any conflict—is underscored by the presence of three bullet holes in the upper-left register of the panel. The title itself has excellent credentials in popular culture, referencing both a well-known song written by The Velvet Underground, and the title of a major photographic project by the artist Nan Goldin, who in more than 300 pictures records the gritty, marginal culture of New York’s bohemia when she was a young woman. At the same time, the title is a coy reference to the artist herself, whose gold-surfaced piece casts back the face of the viewer looking at it. Is this meant to display the narcissism of Evangeline’s audience? Is the reflection meant to include the viewer as a co-defendant facing the sculpture’s presentation of violence? Or is it meant to refer to the fact that the reading of most art is reflected in the values of the person who is interpreting it? It is hard to say. Remember that the series is based on history, however hidden it may be. Evangeline’s accomplishment is to aestheticize violence in a way that stresses the usually tragic failure of violence to achieve its goals.