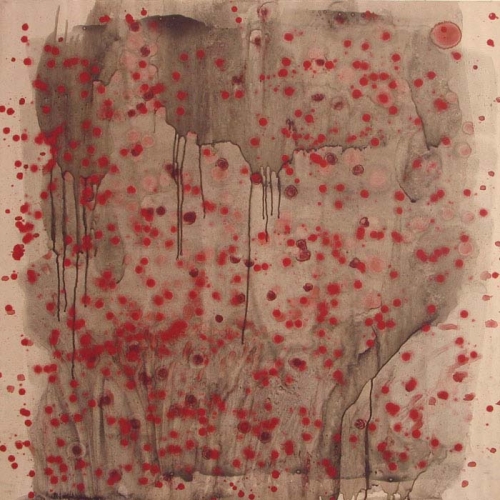 The haunting, hallucinatory abstractions in Margaret Evangeline's recent show came divided into two provocatively titled series, "The Uterine Fury of Marie Antoinette" (taken from an 18th-century pamphlet satirizing the putative sexual excesses of the French queen) and "The Confessions of Mile G." (which refers to the case history of a young French woman who was considered to be pathologically sexualized). While most of these works consist of painted aluminum panels, three of the "Confessions" were fashioned from white archival paper that had been crumpled to resemble slept-in bedsheets, then burned, violated. The remaining two "Confessions" are Amor Heroicus ___ Erotic Virtues of Truffles, the latter a lusciously decadent grape-purple, red and chocolate-brown concoction.

As her titles strongly hint, Evangeline seeks to eroticize abstract painting, and the paint in particular, as a vehicle of desires both concealed and visible; for her, it is a surrogate for bodily fluids, for elixirs, and aphrodisiacs, for effluvia of earth and sea. Viewers may differ as to whether such reification/transubstantiation is achieved, but there should be no doubt that Evangeline reaches a level of visual splendor that is astonishing.

The smooth, silvery surfaces are polished with a grinder into patterns, drilled here and there, then paint is rubbed into the fine lines and spiraled marks. She often uses pyrelene green-black, a pigment developed for military aircraft which recalls the colors of the bayou of her native Louisiana; it yields muted, silvered, muddied, watered greens. The aluminum ground, etched with wavering striations or gridded squares crossed with lines, can be seen through the paint. It's like looking at the shimmering, slowly moving waters of a river of varying and indeterminate depth. Under the gallery lights, the paintings appear to separate into gestures, spots, splashes, and veils of color that float on top of each other, assuming the three-dimensionality of a holograph. The smaller paintings vary in color from the same pyrelene green-black to a radiant gray-gold to a ravishing Ferrari red.

A number of paintings have hidden in their undulations intertwined figures from the Kama Sutra and tiny stamped words and phrases: "electrify," "scatter light," "l'amour tou," "waves of desire," and amusingly, "aaaaah" and "ooooh." The addition of language and figuration seems unnecessarily illustrative, almost redundant. Nonetheless, these are some of Evangeline's boldest, most sensually evocative paintings to date and a pleasure to behold.