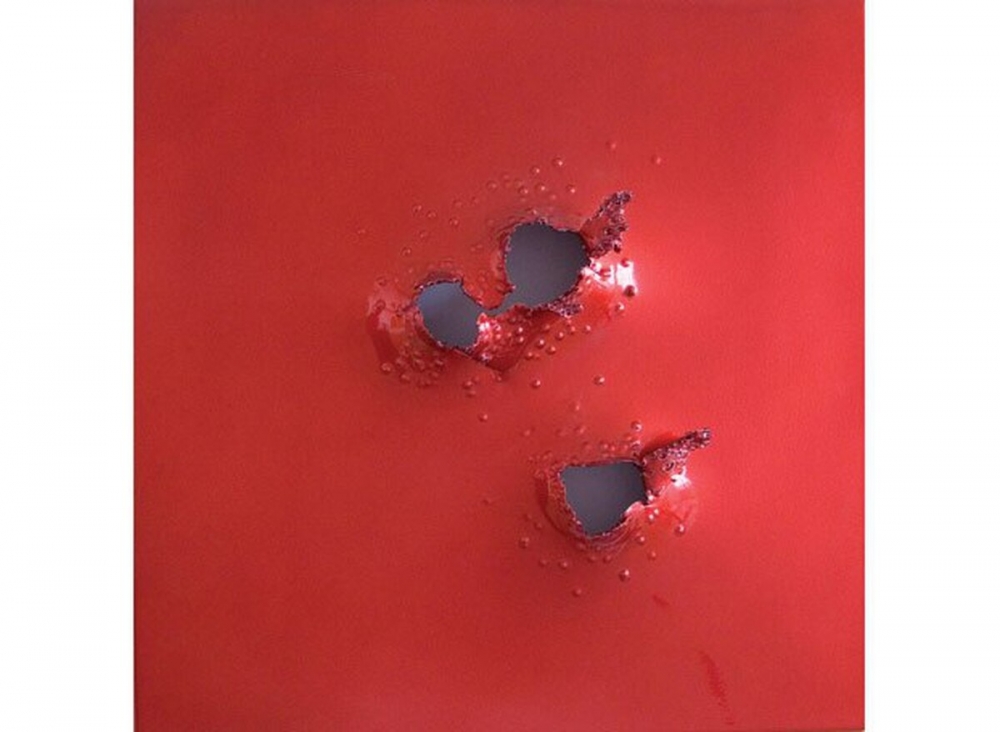 Think of Margaret Evangeline as the Annie Oakley of the art world. The New York City-based artist creates her trademark abstractions by shooting stainless steel panels with handguns, shotguns and rifles of various makes and calibers. To focus on the guns, as many gallerygoers do, is to miss the point. "I'm more interested in the hole than the gun," Evangeline says.

Indeed, the holes left in the wake of her shooting sprees are paradoxically pregnant with content. For this artist, absence is presence, destruction is creation, and "Ready, aim, fire!" is an act of composition. Her exhibition at Butters Gallery, Shooting Through the Looking Glass, features four shot-metal pieces, whose rough, ripped circles and metal tatters create shapes that cast shadows across the panels. In works such as Lumiista #14, the surfaces are further informed by the metal's glossy reflectivity. Gaze into the piece, and you see yourself gazing back, your contours warped into a fun-house grotesquerie where the metal bows and buckles out. Other pieces incorporate powder coating to impart a range of colors: the lime-green St. Sebastian #7, the milky St. Sebastian #10 and the firehouse-red One True Love.

Evangeline is not the first artist to use guns (French artist Niki de Saint Phalle did it in the early 1960s), but she has turned the tactic into a formally engaging, metaphorically rich practice. In the aftermath of the oft-declared "death of painting," she has replaced the paintbrush with the bullet. Finally, it's hard not to view the compositions as sexual stand-ins, with their nipplelike protrusions, nubby flaps and gaping orifices. In art-making, as in lovemaking and target practice, ecstasy commingles with violence.

Evangeline works in other media as well, to variable effect. While her Fluid Flow watercolors are quite lyrical, the paintings in her Nuit Blanc series, with their meandering lines and slapdash application, are barely serviceable. Meantime, her oil paintings of words in sloppy cursive—lovely, beauty, strong, perfect—are facile, hackneyed and just plain bad. It is only in the gunshot works that the artist's vision rings true. Sure, they're gimmicky, but so were Jackson Pollock's drip paintings, Robert Rauschenberg's "combines" and Andy Warhol's soup cans. In these polished, complex works, Evangeline has the basis of style.