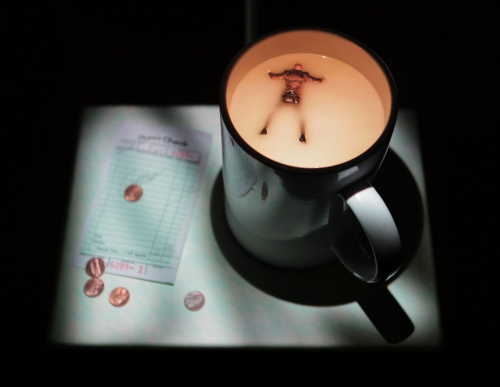 When the vast majority of our information is endlessly transmitted to us from behind a glass or hard plastic screen, it’s easy to assume that this platform is the best and even the only way to view multimedia content. Peter Sarkisian’s recent video works at Jonathan Ferrara Gallery, however, break through these flat, confining surfaces to which video seems so firmly attached, and cleverly jut out into a space—into real life—where they don’t usually belong.

Doing away with video’s traditional display model of a screen almost entirely, Sarkisian projects his works on original sculptures and found objects using digital augmentation techniques that he and a group of video artists developed in the 1990s. But Sarkisian’s videos are not simply layered on top of these rather mundane objects—dictionaries, pencils, sink drains, and coffee mugs—they uniquely interact with each of them, making the items integral parts to the whole of each work. In Book (Version 2) #6, 2015, a pint-sized, projected version of the artist himself scribbles cheeky edits over an open dictionary and navigates between pages 1136 and 1137 by diving head first into the middle binding and then dragging himself up and out of the other side. In Cup’a Joe, 2011, even the viewer becomes part of the work, as seemingly the only soul who notices the man floating face-down in the oversized mug of coffee as a collection of shadows intermittently flit across the mock café table.

By pushing these hilariously quirky scenes into three dimensions, Sarkisian forcefully pulls us into a dizzying dance with reality and imagination. We become more active participants, squatting and squinting to figure out the mechanics of his pieces, and exceedingly tempted to reach out and interact with these fictional scenes—something even the world’s largest projector screen probably couldn’t provoke.