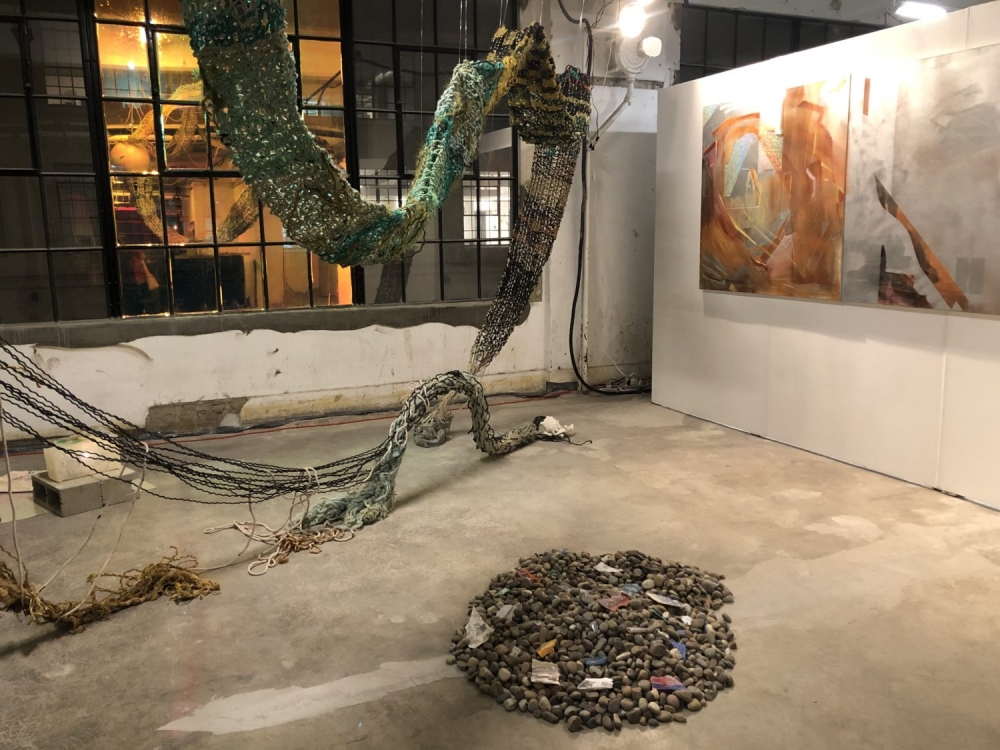 At the many intersections of art, science and technology, creativity, innovation and advocacy, a network of collaborators and colleagues steered by the trio of Kate Parsons, Richelle Gribble, and Janna Avner are thinking about the future while building a new present. Across their personal careers in art, technology, and scholarship as well as in crucial cross-platform venues and projects, they and their network offer a unique, unapologetically feminist perspective on the futuristic zeitgeist.

First, there’s Femmebit. A digital platform and triennial festival celebrating female-identifying artists in L.A. working in video and new media, Femmebit is focused on the ways women engaging with developing technologies can “enable progressive ideas to be born through active creation; and how we, as proponents of these fields, must work together to shape, share, and grow a future receptive open to progress.” This core of their mission has further deepened and broadened into a time of active listening inspired by and in awe of this moment’s struggles for a better society.

Among other activities, they are an attractive presence on Twitch, a mostly free app developed for viewing live video games but increasingly colonized by the art world and boasting thousands of global channels, including Femmebit’s. “The Twitch channel allowsus to open our doors to new local and international artists who would like to exhibit in the U.S., especially those who otherwise temporarily can’t exhibit IRL because of the pandemic,” says Kate Parsons, a professor and curator who programs the channel.

Another collaborative manifestation has been Supercollider, a physical gallery space located in Inglewood’s Beacon Arts Building that also programs off-site projects such as this year’s remarkable SPRING/BREAK Art Show installation. Dedicated to creating and exploring the potential for art, science, and tech to visualize and spark social and environmental action, especially regarding the climate crisis. The gallery is steeped in thinking about the overlap and differences between technology and science as terms of artistic engagement.

Not all technology is virtual, though the digital realm is the great frontier of our times; and not all science is about technology per se, much of it is grounded in experiential, biological, psychological, ecological, and anatomical spheres. And it is art, with its endless capacity for metaphor, wonder, paradox, and imagination, that might be best equipped to bridge these gaps.

The interlaced missions of Femmebit and Supercollider enters all these spaces — female, science, and computer arts — with an accessible and vital new pedagogical spirit. Noting with satisfaction that many incredible female artists are well known and highly respected in the sphere, a big part of their motivation is to reveal and remedy cultural bias online and to “infiltrate and disrupt hegemonic value systems existing to disenfranchise progressive movements.” It’s heady stuff, but the thing is that all these ideas take form as beautiful, unsettling, unexpected works of art.

The Supercollider Mothership HQ is, like so many at this moment, freshly committed to both expanding its virtual presence and examining its role in society. Recent projects with the California Science Center and ReFest were hastily reconfigured as virtual and very Zoomy events, with surprisingly inspiring results. The ReFest conference especially germinated spontaneous interdisciplinary conversations across continents, and proved eye-opening and inspirational on a number of levels. It’s clear that a lot of the reframing going on due to pandemic conditions has only fueled their particular creative fire and accelerated its evolution.

For example, the new online exhibition Artificial Ecologies opens at Supercollider on July 5. Curated by Isabel Beavers, the show presents 3D scanned objects in a VR space. They recently physically renovated the gallery to be optimally activated as a portal to virtual space, in a sort of bigger-on-the-inside way Doctor Who fans might appreciate, as well as the exact sort of physics-defying analog-digital hybrid they advance. Asking questions about art’s relationship with the natural world, the artists “consider the ubiquity of artificial materials, positionalities, and relationships between humans, non-humans, more-than humans and…the impact of climate on local biodiversities.” As Gribble explains, “We love tangible objects bridging science, art and tech, and especially the process of figuring it out from the artist point of view.”

For her part, Avner is currently spending time with her painting practice, which in itself has become a space from which to contemplate the degree of embeddedness of digital awareness in our consciousness. Her excitement for new cognitive, experiential and aesthetic avenues, is embodied as a painter responding to the uncanny, eerie parallel digital universe. “Computers made painting strange,” she says. “And now painting has to respond to that.”

Entering virtual space and moving through it with your brain rather than your physical body does surreal, tickling things to the senses. Avner is intrigued by that feeling of being in a new environment, and has been working to express and respond to that in painting. Thinking philosophically about rendering and mimetic translation, as well as the process of articulating the experience of dimensional space within flatness, is both a perennial and a freshly unknown territory. As Avner says with knowing understatement, “It’s an interesting time to be a painter.”

And speaking of interesting times, Gribble’s particular passion of late has been The Great Pause Project, which in a very real way connects all the foregoing threads as well as matters of specific social urgency. A collaboration with Isabel Beavers, Elena Soterakis, Yoko Shimizu Ben Haldeman and an open-sourced community, The Great Pause proceeds through a three-part structure to amass narratives and images as ”a repository for observations, reflections and collections from this global pandemic” in the classic modality of a time capsule, but with several important conceptual and logistic twists.

There’s an anonymous survey which speaks to individual experiences surrounding COVID-19 and its effects on the lives of individuals within this global collective aloneness; and a pandemic-specific photo diary requesting any and all images which folks feel are emblematic and expressive of varieties of their experiences and emotions as they move through this moment. As the situation permeates every aspect of life, community, technology, food, dwelling, family, nature, philosophical orientation and existential awakening, there is a desire to tell this story in pictures as well as words.