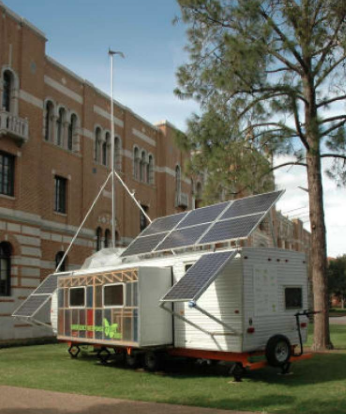 New York artist Paul Villinski created his solar-powered, “green”-designed Emergency Response Studio from a used trailer similar to the ones issued by the Federal Emergency Management Agencyafter Hurricane Katrina. It was recently exhibited in New Orleans’ Lower Ninth Ward and at the New Orleans Museum of Art during Prospect.1 New Orleans, a contemporary-art biennial.

The trailer, along with an installation detailing the construction and information about movable housing, is on view at Rice Gallery.

Q: Was theEmergency Response Studioprompted by the biennial?

A: Well, I was already thinking about it. I had gone to New Orleans in August 2006 for about a week to start to prepare for an exhibition I was going to do there at the Jonathan Ferrara Gallery that December, and I spent a lot of time in the Lower Ninth Ward looking around, just taking in the whole tenor of the situation and collecting discarded objects to turn into artwork, which is what I do in my studio practice. That was what really got me thinking about this mobile studio idea, because I had thought, “I’m going to rent a U-Haul truck and put my studio in it, and I’m going to drive to New Orleans and just set up shop somewhere and really get my feet on the ground there and try to understand … and really make work in response to what’s happening and try to add something useful to the mix as an artist.”

I wasn’t able to pull that together, but I started to think about this idea of a mobile studio at that point. Then when I had the opportunity to meet Dan Cameron (the Prospect.1 director and curator) and talk with him about a project for the biennial, that was the idea that surfaced for me.

I thought, let me start with a FEMA trailer, because of the associations that it has in New Orleans and the Gulf Coast.

Also, the FEMA trailer is frankly such a hideous thing to begin with that there was great potential for transformation.

There was a great opportunity to take a sow’s ear and turn it into a silk purse, which is what I do in my work. …

Q: I remember reading that you would like to see artists become part of what is dispatched in these types of emergency situations.

A: I was thinking about this tradition of war artists, which has existed since the Civil War. Winslow Homer was a war artist. He went in and embedded himself with the troops and responded to what he was experiencing as an artist, and that’s something artists have been doing ever since. So when I was in the Lower Ninth Ward a year after Katrina, I felt as though there was some kind of war being waged there. … I thought we really should have artists respond to disasters — not just wars, but natural and man-made disasters of all sorts. I think that the Prospect.1 exhibition kind of proved the point, because I believe that all of the 81 artists who took part were really eager to go to New Orleans and try to do something useful.

I think that artists in general want to feel that their work is useful, is of value to people in our society. My thinking is that the Emergency Response Studio project suggests to artists, “Hey, do get involved. Do go and respond directly to things. Don’t simply sit in your garret and make little tempera paintings, but get out in the world and try to be useful.”

Q: How do you feel about the fact that for the next few weeks this really amazing trailer that you’ve made is sitting here on the Rice campus an hour or so away from Galveston.

A: Where it could be used right now, yes. Well, I think that it is a kind of prototype, which isn’t to say that it won’t be put into service at some point, but my goal right now is to have it serve as a prototype and have people see it and to provoke thought with it. …

I think that this project is germane in a setting like Rice, because of the engineering and architecture (departments) — and because it’s Houston.

Houston was directly involved post-Katrina. There are lots of bumper stickers in New Orleans right now that say “Thanks, Houston.”