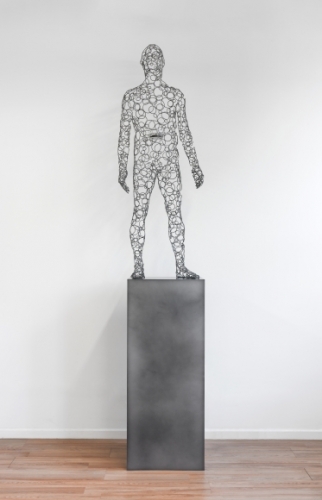 Among the aspiring art stars angling for attention in Chelsea is an unusually quiet collective: butterflies, turned loose inside Morgan Lehman Gallery to flutter around and orbit among flowers and lights.

Most, however, hang out in artist Paul Villinski's gurgling "Butterfly Machine," where they were born and bred.

The artist, whose show opened in September, said his initial interest in butterflies was symbolic, as a way of representing change. "Then my interest deepened and I wanted to know more about the actual creatures," he said. "That led to all this craziness."

Mr. Villinski began work in 2012 on his room-size machine, which features two towers, each more than 7 feet tall, and quickly realized he was in over his head. "I was never especially good with plants," he said.

His fortunes changed when he met Rudi Mattoni, an expert on butterflies and moths. The differently minded peers—a 54-year-old artist and an 87-year-old scientist—went to work together in Mr. Villinski's studio in Queens.

"You think of little old ladies making kitschy things for the kitchen wall," Dr. Mattoni said of most butterfly art. "With Paul, when I saw pictures, I was amazed."

Mr. Villinski started making art involving his favorite winged subject 20 years ago, when he began collecting beer cans on the streets of Long Island City and cutting them into butterfly shapes.

"The first pieces had to do with addiction and recovery, and I wanted to describe the way I saw friends and family moving from being very damaged individuals into lives that became beautiful and meaningful," Mr. Villinski said. "The initial pieces were about the possibility of change."

Decades later, he still collects cans and uses them to make wall pieces of the kind also on display in his show. Three of them at Morgan Lehman each feature about 250 metal butterflies pinned at different distances from the wall, in shapes resembling extinct or endangered species. Nearby is a sculpture of an empty cast of the artist's body, with real monarch butterflies flying inside.

The back room of the gallery holds the butterfly machine, which was built with supplies from Home Depot and hydroponic-supply stores. A tower of plants, including milkweed, cabbage and kale, grows for food.

Next to that is a tower with butterflies in different stages of life. Young caterpillars crawl around on branches while their older relatives hang nearby in their chrysalis phase, waiting to crack out of their shell and fly.

"It's hard to explain how crazy it is to care for these little insects," Mr. Villinski said. "We've started generations and lost the entire thing, then started over again. The thing that this has really convinced me of is that it's incredibly difficult to simulate the natural world."

All four butterfly species in the show are native to New York, unlike the tropical varieties at the American Museum of Natural History's annual butterfly exhibition, opening Nov. 1.

As his interest in the animals has deepened, Mr. Villinski said an increasing part of his artistic goal is to raise awareness around climate change and conservation.

"We're losing species of butterflies so rapidly that we don't even know what we're losing anymore," he said. "There's this illusion of separation we have between ourselves and everything else in the animal kingdom, but the reality is we're really all the same."

Mr. Villinski learned as much last summer when, as an amateur enthusiast, he attended an intensive course for butterfly experts in the Amazon region of Peru. While there, he saw some of the world's 146,000 species, including a rare blue morpho "as big as a bird," he said.

In less wild climes, Mr. Villinski is tending his creation until his show closes. He has donated it to the University of Nevada, Reno, which will use it for research.

"It's a kick to me to think that, as an artist, my butterfly machine is worthy of a real laboratory," he said. "I read somewhere that scientists open the door, but it's up to artists to decorate the door and get people to walk in."