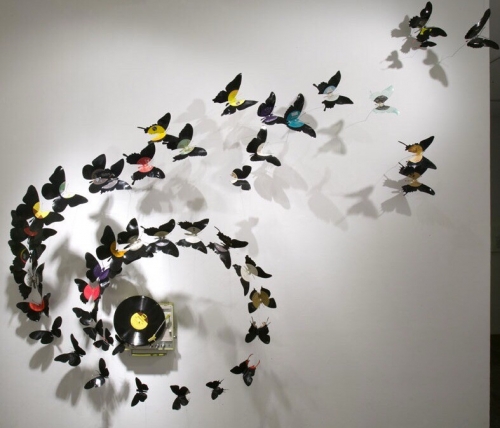 Flying can mean simply leaving the ground and flying up into the sky, but it can also denote the realization of our hopes and dreams. New York artist Paul Villinski is coming into the limelight with works that express this kind of meaning and feeling. He says he came to realize why people yearned to fly when flying a small glider himself. Using easily found objects such as gloves and beer cans to depict flight, his works appeal readily to the viewer while visually stimulating our desire to fly.

The gloves and beer cans that Villinski picks up on the street are worthless objects that someone has used and thrown away. He sews the gloves together to make wings, cuts up beer cans and records to make a flock of butterflies, or makes an airplane out of an old wheelchair from a hospital. By visually expressing the moment of flight in this way, his sculptures both reflect our dreams of flying and give new value to everyday objects discarded in the street. From something useless to something imbued with our dreams: Villinski's works reveal anew the power of the artistic imagination.