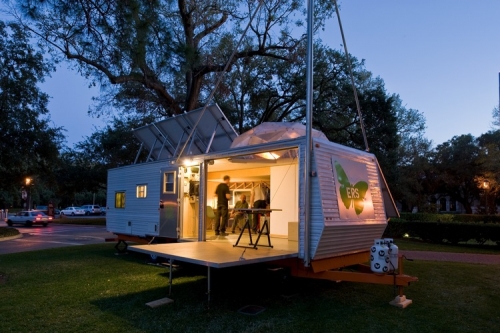 A post-disaster trailer home can hardly be called a work of architecture. But Nikolaus Pevsner’s well-known aphorism about Lincoln Cathedral—a bicycle shed is a building, but the cathedral is a piece of architecture—might favorably apply to artist Paul Villinski’s reinvention of a FEMA-style trailer as a genuine piece of design.

In 2008, Villinski purchased a 30-foot Gulfstream Cavalier in an online General Services Administration auction, pulled out its toxic formaldehyde guts, carved away its fragile metal skin, and opened up its cagelike interior to create an appealing prototype of a live-work space that he calls Emergency Response Studio. The trailer features a nine-and-a-half-by-six-and-a-half foot wall that folds out as a usable deck, plus a beautifully thin, six-millimeter polycarbonate geodesic skylight that nods to the trademark flimsy construction of mobile homes.

The trailer is currently parked in front of the Zilkha Gallery at Wesleyan University in Middletown, Connecticut, along with an exhibition on view through November 8. The gallery itself features an installation curated by Nina Felshin that details Villinski’s design process through videos, drawings, collages, and a one-to-one skeletal mock-up of the original trailer, expressing the artist’s view of the cramped space as a jail-like cage.

That original Gulfstream was virtually identical to the fifty thousand or so built for the Federal Emergency Management Agency, which became notorious for the toxic materials that went into their construction and endure as a symbol of the agency’s inefficiency as it attempts to rebuild New Orleans after Hurricane Katrina.

Villinski’s model sits amid the charming Wesleyan campus—surrounded by a perfectly scaled ensemble of concrete buildings designed by Kevin Roche John Dinkeloo and Associates in 1973—sporting a mini-tower windmill and multiple solar panels, and at first approach, it may seem little more than a standard-issue trailer tarted up with green design. But the project, which developed out of Villinski’s desire for a temporary studio in post-Katrina New Orleans, succeeds in turning this mean habitation into a thrilling place to live.

That is due in part to the sustainable materials Villinski deployed, such as recycled birch plywood used as walls, and Marmoleum, a natural linoleum made of linseed oil pressed from flax seeds, for the floors. But what is truly sustainable about this project is the way in which Villinski has created an easy and inexpensive model for how architectural process, thoughtful design, and a Skilsaw can turn a “bicycle shed” into architecture.