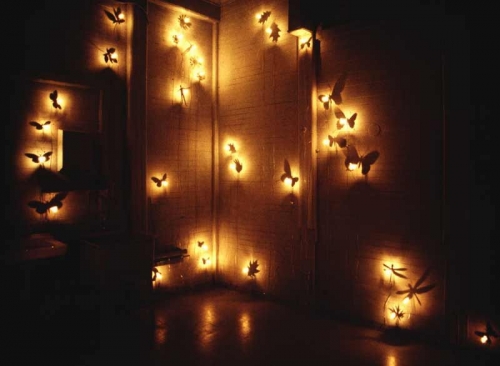 A cozy garden is tucked away Downtown, serving as an artistic haven from the frigid wind chills and snow flurries outside. There, luminescent butterflies and hummingbirds flit against the shadowed walls and a solitary chair in the middle of the room invites any passer-by to sit.

Instead of using traditional media to adorn the gallery walls, the artists toyed with light, shadows, and silhouettes to create a soft array of images that manifest the garden-like feel of the installation.

The two artists spent four days this month creating the improvisational setup for "Lumenroom," and Villinski said he started the project with few ideas about what the final installation would look like.

What he did create ahead of time, however, were the dozens of tiny butterflies, hummingbirds, leaves, and human shapes. And all were formed from the most unlikely of materials: Budweiser beer cans that he found on the street.

Villinski has been working for a decade with materials he has collected from the street and, for him, it's a sort of magic.

"Cutting the butterfly shapes was kind of a Zen activity," Villinski said. And the aura of this unusual garden is also Zen-like. Each miniature cutout figure is attached to a flexible wire positioned against the gallery wall with a small light bulb illuminating it, creating a vivid silhouette of the shape.

Though Villinski was originally trained as a painter, he used tiny bulbs from Radio Shack, scissors and files for this installation, which he calls "a modest alchemy."

The air flow through the room causes the insect figures to be in constant motion, which contrasts with the static chair in the center of the room.

"I've always felt the chair was a proxy for the human figure," Villinski said.

The wooden-slatted, weathered seat creates a sense of place in the gallery room. It almost looks as if it were stolen from a Southern garden, and it begs to be sat in.

Villinski describes the effect of the installations as "a gently fluttering shadow garden of otherworldly flora and fauna."

And he said the installation was not just for those with a vast understanding of fine art. "Knowledge of art is not a prerequisite, yet the work is sophisticated and will reward discriminating viewers," he said.

Meyers and Villinski became friends when they attended Copper Union in the 1980s, and this is their first time exhibiting at TRAF. The two were aiming to convey a sense of "simple magic" with the installation, and they achieved it.

The exhibition isn't particularly elaborate or monumentally awe-inspiring, but it evokes a serenity that can't be found amid the wintry hustle and bustle outside.

The warmth of "Lumenroom," is a stark juxtaposition against the seasonal cold, and Villinski said that is by design. Since beauty can't always be found in the elements during the coldest months, he said, he creates his own.

And with the temperatures plunging, a warm little sanctuary that simulates the outdoors is ideal for gallery-goers. "It just makes sense to have this kind of garden in the winter," Meyers said.