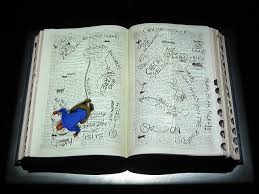 You're standing in an art museum, staring into a pot of blue water out of which air bubbles occasionally burble. You're chuckling to yourself and shaking your head in disbelief. Were this a bucket and an air hose and some colored water, you'd be offended by the pretense of this as "art." But because it's, in fact, a bucket into which the image of water is being projected, while an audio loop provides a time-synched timpani of bubbling and dripping, you are thrilled. A bucket of blue, bubbly water that's mostly made up of sound cues and light isn't pretentious. It's genius.

And, therefore, so is Peter Sarkisian, whose Scottsdale Museum of Contemporary Art retrospective, "Peter Sarkisian: Video Works, 1998-2006," is in its final days. It's an exhibit full of commentary on what is real and what is not, and there's plenty of subtext here about art and life, besides. Sarkisian's multimedia installations combine filmic chicanery and sculptural technique to point out the difference between what we think of as "real" and what we experience in reality.

For people who don't care about insight and subtext, there's still plenty of fun to be had just ogling Sarkisian's inventive commentaries on reality and unreality, on time and space and the static world of inanimate objects. In Book, a large dictionary stands open on a short pedestal. A tiny man (Sarkisian himself) crawls over the face of the book, scribbling comments and editorial notes, then erasing them. He crawls into the spine of the book and disappears, only to climb out again and onto the facing page, where he resumes his scribbling. In Hands at a Table, the face of a table is inhabited by disembodied hands that are mimicking the movements — cuticle-picking, flip-flopping — of a larger pair of hands at the head of the table while sandpapery sounds are heard from nearby.

It's all very heady and quite entertaining, but there's more here than just the wow factor of the talking mannequins at the De Young Museum's Jean Paul Gaultier retrospective, which are animated with filmed projections of women's faces discussing the costumes the mannequins are wearing. With pieces like Registered Driver, a car door onto which Sarkisian has projected minutes-long images of himself driving through city streets and in circles inside what looks like a parking garage, the artist fuses the mundane with the mediated unreality of film, and forces us to become something other than a passive viewer — the traditional trap of commercial cinema. The artist, a former film student, has reconfigured our role as a disengaged observer by engaging our active mind with questions like "How did he do that?" and "Where is the dripping sound coming from?" and by presenting us with kinetic, three-dimensional objects that literally aren't all there.

It's that vision — that version of the real world — that both delights and unsettles us, and it's that unsettled feeling that Sarkisian is offering as an element of his art. By keeping us aware of what we're seeing and hearing (blue water in a bucket; the sound that bubbles make) while also teasing us with the knowledge that much of what we're seeing and hearing isn't actually there (the blue water; the bubbles), Sarkisian is yanking us to and fro between our perception of reality and reality itself. And his work in this Scottsdale retrospective is so pleasing, so full of humor and so layered with subtle commentary, that we revel in this tug of war with the artist.