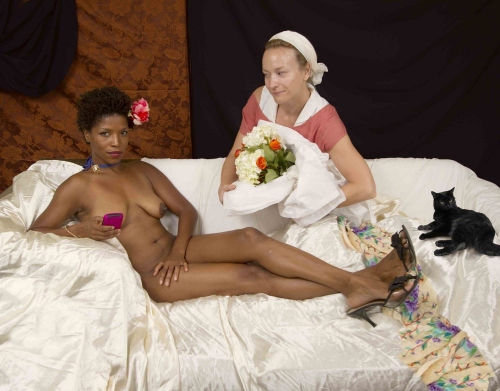 Elizabeth Kleinveld and Epaul Julien are undertaking their own method of time travel.  The two artists, working together under the moniker E2, have been reproducing iconic paintings from history photographically with not-so-slight alterations.  They take classic works and switch the race and/or gender of the painting's focal point while carefully representing the artwork's secondary details.  The result is a challenge to those familiar with art history and a double take for others.

E2 don't just carry out a simple inversions.  Their goal is to make people conscious of their ingrained stereotypes but without sympathy aimed at any one minority.  By elaborately re-staging these artworks, the artists are trying to reach beyond our racial or gender sensitivity and into our self-consciousness.

For instance, in their Ode to Courbet's Sleep, the hyper-sexual comfort of the models remains, but the difference in skin color stands in a stronger contrast.  In the original painting, scandalous for the way it expressively captured lesbian sexual satiation, there are two women whose skin tones are slightly separate.  In the E2 version, the sexuality is toned down but the racial differences are turned up.

In their Ode to Edward Manet's Luncheon in the Grass, a painting that scandalized Parisians in its own time by presenting a nude woman participating almost proudly in an afternoon with two clothed men as both an object and an equal, E2 play with both gender and race.  A black and white woman dressed in gentleman's outfits observe the unabashed nude man, but the attitude aristocracy and ownership is retained.  It is a complicated image, best understood in context.  Without the original, it would be a farcical collage despite its decadence, color, and precision.

Kleinveld said, "Because I like to study the images and Epaul is usually behind the camera, I can focus on the little details so that our version exudes the emotion of the original, and Epaul can capture the right proportions and capturing the scenes. One important thing to consider is that we don’t use 'models.' We work with other artists, performers, friends and colleagues who have an affinity for what we’re trying to do."

One of the most successful images E2 has done is Portrait of a White Woman, a re-invention of Marie-Guillemine Benois' daring Portrait of a Black Woman from 1800.  The original presents a topless black woman bearing an enigmatic expression.  It belongs to the culture of European abolitionism.  Centuries later it takes a knowledgeable person to regard the E2 version as a subversive take on the image, but it is still striking.  Portrait of a White Woman retains the proud feeling of the sitter, but we are left bereft of the exotic and fitting nature of the original.  The new protagonist has a dare in her expression, something inherent in photography and its instantaneous nature.  She may be trapped in a colonial costume, but her wisdom, assertion, and self-possession are all on display in this image.

E2 have a motto for their project: In Empathy We Trust.  They believe that by jarring a viewer from their expectations they can instigate an awareness of how firmly we have constructed our stereotypes.

"We believe that Empathy binds people together, decreasing judgments and stereotypes that can lead to prejudice, discrimination and violence. We hope that by linking this to our work, people will understand that awareness of the other and the ability to put yourself in their shoes will create a more harmonious society."

It's a tall order, but there is a durability to their practice that goes beyond novelty.