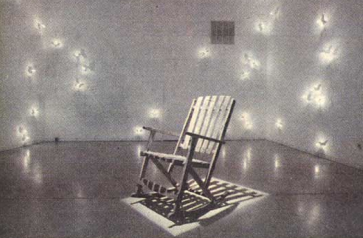 In the 18th-century, theorists of the origins of drawing developed a fondness for the story of the Corinthian Maid, whose profile, cast by a shadow onto a plain wall, was traced in charcoal by one of the first artists. It's a fanciful tale, grounded in some classical legend, which naturally appealed to neo-classical painters such as Joseph Wright of Derby. Light, shadow and the theory of forms are critical to an understanding of historic draftsmanship, but they have an unexpected relevance to contemporary, radical ideas of drawing. There, the impermanent mark caused by the shadow may be enough to constitute the act of drawing itself.

Paul Villinski's and Linn Meyers' "Lumen room," at the Three Rivers Arts Festival Gallery, seems to carry you back into the 18th century when rooms were sparely lit by guttering candles. The shadows cast were not immobile in those days, but flickering and almost animated, even to the point of exaggeration. Moreover, these shadowy outlines were softer, more diffused. The ambiance was different then, but one can appreciate the rise of the silhouette or the shadow-games of the nursery in the context of the special quality of light that was then common.

To walk into the gallery from busy Penn Avenue is to experience a deliberately conditioned environment. Villinski, who controlled the lighting effects in this collaboration, uses tiny electric light bulbs that correspond to the power of the candle, wired up to inexpensive transformers from Radio Shack. Tiny aluminum cutouts, juxtaposed near these light sources, cast shadows across the walls.

Villinski has some skill in this (also 18th century) art of decoupage, although the source of the aluminum is more contemporary. He finds crushed beer cans in the street of the "grimy" New York City neighborhood in which he lives. (In other art projects he has made use of found objects picked up in the thoroughfares of New York, such as poignant, discarded children's gloves.) Small electric fans set up currents of air in the gallery, which gently move the metal cutouts. The effect is to animate the cast shadows on the walls of the space. They represent butterflies, leaves, and less commonly, human hands. These small movements and the discreet susurration of the fans are complementary, and evocative.

The environment thus becomes that of an artificial garden, but monochromatic, en gristle, reticent. A rustic garden chari, spotlit in the center of the gallery, reinforces the conceit. There is a deliberate irony that this takes place in the middle of the city.