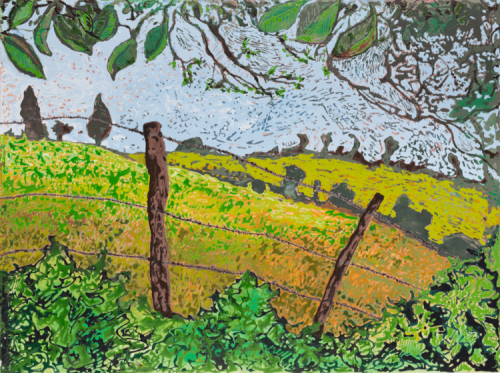 Gina Phillips grew up in Richmond, Kentucky, but has lived in the lower 9th Ward of New Orleans since 2004. Last summer, she was awarded a two-week artist residency in Briant, France. While painting en-plein-air, she was struck by the similarities of the Kentucky landscape to her new French environs. Here, she discusses her latest series, titled “Crow Valley,” and how it brings together the memory of her family with her homes in Kentucky and Louisiana, and the far-flung villages of Burgundy.

“I grew up in central Kentucky. We were a pretty poor family in a rural area, and it was great, because I didn’t have to adhere to any ideas of propriety. My grandfather was a mechanic, so we had our own junkyard in the back. My cousins and I would make our own spaces with leftover stuff. That was my initial training to become an artist. Everyone in my family worked with their hands: my grandmother was a folk artist, and my mother would dabble in all kinds of art making, like hooked rugs.

I’m known for working with textiles, but I consider myself a mixed-media artist. When I went back home to my grandparents’ house in Richmond, I would find the same kind of leftover materials that I had used as a kid to build things. I found ways to incorporate the material into multilayered wall-pieces. For example, I would take a doorframe, and then I would stretch a printed fabric or canvas on top of it and paint a narrative that involved or related to the materials. After a while, I started using fabric as my palette and thread as my drawing tool. I didn’t know how to sew properly and had never been trained as a seamstress. In Hurricane Katrina, I lost all of my tools, and it forced me to reexamine my working methods. I acquired a long-arm quilting machine afterward, and it changed the way I work. I use it like a drawing-with-thread machine—not in the traditional manner. I’ll start with an underpainting, and then I’ll appliqué all kinds of fabrics or materials like hair weaves on top of that. Anything that is possible to fill in the surface of these works, I’ve probably tried and put on there.

‘Crow Valley’ came out of the artist residency I completed in France. I was there for two weeks, in a 400-year-old farmhouse in Burgundy. I went out everyday to paint. I couldn’t help but notice the similarities between rural Kentucky and the French landscape. The rolling hills were like what I grew up with. Also, in that part of Burgundy, they raise Charolais cattle, and there are stone fences to mark the pastures. Where I grew up in Kentucky, there was the same method of land division that the Irish brought to the region, with the horse farms and what not. It felt very familiar to me.

After feeling this connection, I was inspired to go home and start painting the Kentucky landscape again. My grandfather was sick at the time. We didn’t know how much longer he had to live, so I went up and spent time with him. He and I used to go riding motorcycles together when I was in my early 20s, and I wanted to revisit some of those spots. There was one place that stuck in my memory, but I couldn’t remember what it was called. I knew he would remember where it was, so I described it to him and he was like, ‘Oh yeah, you’re talking about Crow Valley.’ He gave me very specific directions how to get there, and I was able to find the spot and paint. He passed away about six weeks after that visit. I named the series ‘Crow Valley’ in memory of him and the time we spent together there.

The landscape in rural Kentucky has a bunch of winding roads, and when I was a kid, we would just go driving around. For me, it was almost a spiritual experience—that sense of rolling through the landscape. In New Orleans, I live right by where the industrial canal meets the river. I think one of the reasons I was drawn to the spot is that there’s a curve where the river meets a big earthen, grassy levee. That’s one reason why I like living here so much—this particular neighborhood is like living in the countryside rather than a city. It resonates with me because the hill looks like the ones that I grew up with.”