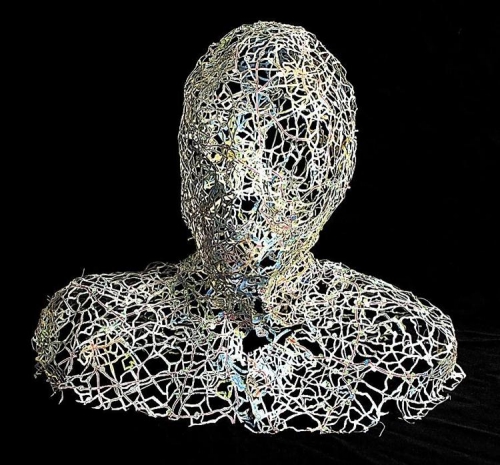 How are people like places? Most obviously, both have arteries. Urban electrical networks mimic our nervous systems and traffic travels down roads like blood flowing through veins. Such parallels are poetically explored in Nikki Rosato's graphical works via her precisely sliced and diced road maps reconstituted into fanciful interpretations of human connectedness. In Connections No. 3, male and female figures comprised of streets face each other while traceries of interstate highways project from head and heart like stray thoughts and emotions. Rosato's Self Portrait (pictured) is an intricate network of dissected paper-map roadways cobbled into a 3-D bust like a ghostly shroud, a lacy nervous system shorn of flesh and preserved for posterity like a maze of cellular memories.

Curator Nina Schwanse named her unusual group show, The Solar Anus, after an essay by surrealist bad boy Georges Bataille. A seminarian-turned- librarian, Bataille was a philosopher/poet who was as visceral as other surrealists were cerebral. Shunned in his own time, his lurid explorations of the intersections of mysticism and sadomasochism eventually proved prophetic and set the stage for cultural phenomena ranging from film noir and punk rock to Lou Reed and Thelma and Louise. Here his day job as a librarian is commemorated in Kyle Eyre Clyd's installation emphasizing the fetishistic nature of the white cotton gloves used to handle rare books. A nearby video projection by Matt Savitsky features a naked man wearing a bouquet of flowers as a mask getting pelted with apples, and Jesse Greenberg's sculptures are creepy for no apparent reason. From the ceiling, Mary Morgan's shiny black coils of (pre-digital porn) videotape dangle like decorative rococo excreta, while in the back gallery, David Hassell's sleek, working UV tanning table sports a custom finish like curdled skin. As with Bataille, our senses recoil even as morbid fascination lingers.