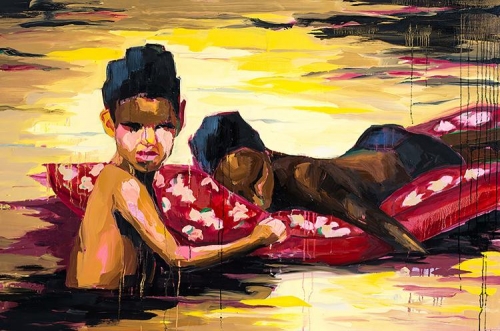 Identity remains an inescapable topic of press coverage and conversation. Debates about race and gender can resemble tribal conflicts, but individual experiences often are more nuanced.

As the Augsburg, Bavaria-born daughter of a German mother and an African-American father, Ruth Owens’ mostly German childhood was periodically interrupted when the U.S. Army transferred her soldier father to unfamiliar parts of America. Her Identity Theft paintings at Jonathan Ferrara Gallery convey how those unsettling transitions affected her via loose, expressionistic brush strokes that evoke both disorientation and a distinct sense of wonder.

Based on old family photos, paintings like Boyguide (pictured) explore how differing skin tones reflect a family's evolution, a theme also seen in Cousins, and Half Brothers, where superficial differences pose no impediment to familial bonds. A different reality appears in That Beauty Queen, a vintage Augusta, Georgia parade scene. As a child, Owens saw the blond “beauty queen” as an icon to be emulated, but this recent painting places the figure within a broader ambience in a street scene where many factors are in play.

Owens also draws on her 25 years as a New Orleans cosmetic surgeon, as well as a wife and mother, in paintings that still reflect the sense of wonder that defined her remarkably varied childhood experiences in Germany and America.

Jerry Takigawa's vintage Japanese American family photographs at New Orleans Photo Alliance, taken before over 100,000 mostly innocent American residents were forcibly detained in World War II internment camps for “security” reasons, remind us that ethnic hysteria can erupt suddenly. Here, the contrast between original images of smiling Japanese Americans, re-photographed to include internment ID cards and racist relics like “Jap Hunting Licenses,” is starkly chilling. They also are meditative in a way that penetrates beyond the anger that blatant injustice provokes, inviting us to look more deeply into the mysterious inner darkness that remains a part of the human condition even in the most ostensibly “advanced” societies.