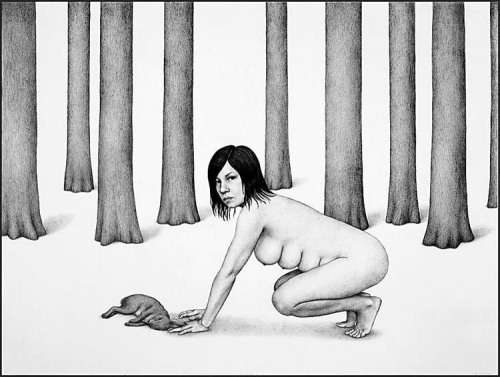 Even by the standards of large institutional survey exhibitions, the Contemporary Arts Center's Mark of the Feminine expo of works by local women artists covers a wide range of styles and visions. The sheer diversity is daunting at first as we are confronted with artworks ranging from meticulously linear concoctions such as Monica Zeringue's large, graphite She Wolf self-portrait (pictured) and Gabrielle Gaspard's intimate intaglio print of female hands impossibly bound with delicately thin thread to raucously outrageous works like Sarah Sole's satiric paintings of Hillary Clinton acting out in unlikely situations and Vanessa Centeno's large, surreal soft-sculpture Get It Up, which suggests a lurid sea anemone from outer space. Curated by Regine Basha, the works in this show are united by their psychological vibe and suggestive ambiguity, though exactly what they suggest depends on the viewer. More broadly, it's like a travelogue exploration of the far corners of the female psyche as interpreted by female artists in this complicated city.

While artists like Zeringue are well-known, the show features a rich assortment by less familiar and emerging artists.