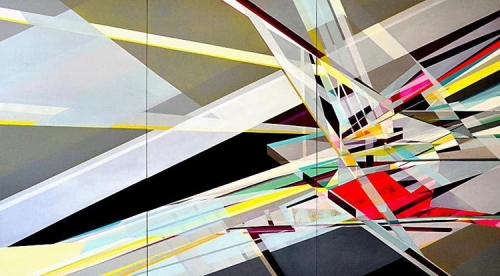 In the past, New Orleans' art season officially started with Art for Art's Sake in the first week of October, but that event has long been eclipsed by the August anomaly known as White Linen Night, which, like so many iconic events, inspires speculation. Viewing art shows at such times can be like searching tea leaves for omens, and this year the portentous signs assume angular configurations. In Marna Shopoff's paintings and drawings at Jonathan Ferrara Gallery, the mysterious interaction of light and space creates an architectural quality that is inviting yet elusive, as if dwellinglike spaces appeared within mirages of colliding rays of refracted light that Shopoff had flash-frozen. Like latter day deco mashups that somehow meld vintage modernism and nanotechnology, some usher us into existential antechambers from which there is no obvious escape, and others — like her 5- by 9-foot painting Layered (pictured) — suggest rhapsodic futurist constructions composed entirely of laser light. Shopoff says growing up behind her parents' drive-in restaurant may have affected her, but her best works are lucid explorations of how certain shapes, colors and spaces affect our perceptions of place.