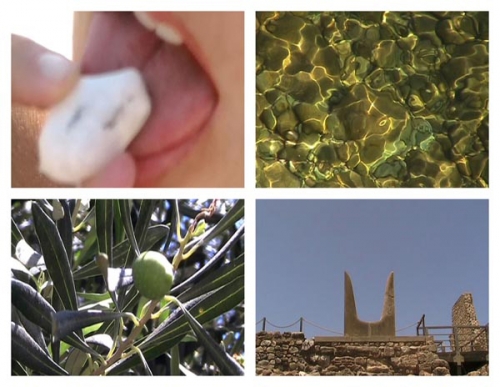 The video opens with the sound of the tide, and a tight close-up of the artist bringing a stone from a shoreline to her mouth. She licks it slowly. The act, along with the sound of the sea, is both primal and sensual. The ritualized action is repeated, establishing a deep connection between the artist and the sea, as well as the viewer—it’s difficult not to imagine the sensation of the coolness of the smooth stone and the taste of salt in one’s mouth while watching it. The video continues with images of water glistening on the rocks in the sun; then, the artist enters the frame walking back and forth behind a large sculpture resembling bull horns in the ruins of Knossos. It ends with a close-up of an olive branch and a massive wave of cicada chirps. This is New Orleans artist Anastasia Pelias’s single channel video “Alati”. (The term is Greek for “sea salt”.)

Pelias descends from a New Orleans family of Greek heritage. In her youth, her father told her that their surname was a badge of honor which connected them to the ancient Greek King Pelias who was sired by Poseidon, the god of the sea. This connection made its mark on Pelias, and her love for the sea has increased ever since. The proof is in the current bodies of work Pelias has deployed in three separate group exhibitions that are running concurrently in New Orleans and Mobile, Alabama.

“Alati” is part of the exhibition “Mara/Thalassa/Kai: The Sea” at the UNO St. Claude Gallery in New Orleans. The title of the exhibition refers to three ancient goddesses of the sea with Pelias representing Thalassa, the primordial Greek goddess of the Aegean. (Coincidentally, or not, Thalassa also figures in another high-profile exhibition in New Orleans this summer.) Along with the video, Pelias is showing two large paintings from her “Washed” series – “Washed (Translucent Turquoise)” and “Washed (Green).” In these expansive, sumptuous and limpid monochromes, Pelias played with the liquidity, viscosity and translucency of her oils, coaxing the movement of water in ripples and waves across the canvases. Beside the sea, painting is actually Pelias’ first love. She considers herself “a painter who happens to engage in other media.”

A triptych of three paintings from the Washed series is her contribution to Fresh! New Work by 9 Gallery Artists at the Heriard Cimino Gallery on Julia St. in New Orleans. The three pieces together give the viewer a watery tour through the various moods of the color blue.

Pelias is also part of  “Catalyst: Artists of South Louisiana Respond to the Gulf Oil Crisis”at Space 301 in Mobile, Alabama. The group exhibition is comprised of more than 80 artworks by 18 New Orleans and Louisiana artists and aims at continuing the dialogue concerning the Gulf Oil Crisis a year after the event. In keeping with the somber tone of the exhibition, Pelias has contributed a darker painting from the Washed series — “Washed (Golden-Green and Violet-Umber).” One half of the canvas evokes green sea and light while the other half evokes impenetrable murkiness and death. Along with this painting, Pelias is exhibiting an installation and a video, both equally chilling. The installation titled “Pensacola Beach” consists of an oil and salt encrusted hornet’s nest or barnacle-like object (retrieved from the beach during the height of the crisis) atop a marble slab and a large photograph of the object itself. The piece eminates death and disaster, yet it retains a peculiar beauty and preciousnes.

The 3-channel video installation “It’s Gonna Be Alright, Baby” is Pelias’ ode to the crisis by way of oyster shucker Thomas “Uptown T” Stuart, who works the oyster bar at the artist’s favorite New Orleans oyster house. The Gulf Oil Crisis left a pall across the Gulf seafood industry, devastating many seafood crops and practically ruining the lives of many fishers and restauranteurs. In the video, Pelias documents Stuart shucking oysters, discussing the love and pride he has for his trade, and consoling the artist herself. Through Pelias’ editing, this endearing documentation becomes morose and psychotic, pointing to the fact that the crisis is far from over. If anything, we probably won’t know about the full impact of the crisis for years to come. The effect of the video is devastating in its repetitiveness. Pelias stated that she wanted it to mirror the repetitiveness of the media coverage that came out of the height of the crisis.

So Pelias is currently having quite a moment. She has never been what anyone would call a political artist: her oeuvre has always been more about a sensuous, deep, and visceral engagement with creation and form rather than politics. Yet, all of our lives have seemed to become more political in Louisiana in the aftermath of Hurricane Katrina and the Gulf Oil Crisis. It seems foolish to think that anyone, including Pelias, could escape this. What is exciting about Pelias’s current work is that it engages in the political without completely succumbing to it. She is not making broadsides; she’s manifesting a personal as well as a universal sea change.