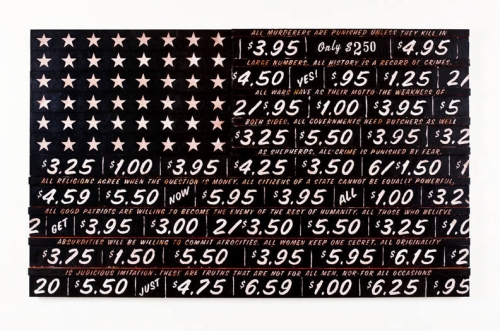 Skylar Fein combines text and paint to create powerful imagery on paper, aluminum, and wood. With a burst of dry verbal wit and starkly contrasted style, his works bite you subtlety and leave you thinking.

With the rise and renaissance of hand-lettering, ­­­Fein’s work recalls that of both pop art masters and signage gurus in works like his series of oversized matchbooks (featured in both the 2014 show Giant Metal Matchboxes and 2015 Strike Anywhere) and other works like his presidential silhouettes such as “Red FDR/Fried Chicken,” named for the color of the text signage and that which it is advertising. Here, Fein discusses text-based art, the darker side of pop, and the failure behind great 20th century revolutions. – Ellen C. Caldwell, Los Angeles Contributor

Ellen Caldwell: I am a big fan of text-based art, and unrelated, I also love to see how the U.S. flag is used in art, so when I saw “Black Flag for Voltaire (All Murderers are Punished)” I immediately wanted to know more. Please tell me a little bit about the background of this piece.

It’s a mundane story. And it reminds of something Ad Reinhardt once said: “Most artists today are workers."

EC: “High Water at Carroullton Gauge (White Flag)” also takes a faint, faded white and grey U.S. flag as its background and seems equally socially charged, particularly when compared to the seemingly benign GE. Could you also tell me about these pieces and how (or if) they relate?

SF: The Carrollton Gauge is used to measure the height of the water in the Mississippi River. If you live in New Orleans, there is no fact more politically charged than the height of the river. It may be arbitrary, it may be by design, but one thing it isn’t is natural.

People say, “Oh, I don’t like politics.” Well, too bad politics likes YOU.

EC: Yes, that also ties to your artist statement for NAP #112, where you have a powerful and personal account of surviving Hurricane Katrina and living in the aftermath (below). This must have deeply impacted the future of your art and life itself. Could you discuss this and also describe how your art or practice now works to “discover the elusive national soul”?

"In the wasteland of a destroyed city, I and all my friends were handed our lives. And there remains a chance, however small, that in a potlatch of destruction we will discover the elusive national soul. While you hope and pray for a new world, we will be in the streets answering those prayers. And who answers prayers, but gods?

SF: Wow, I wrote that! It’s wild reading the things I wrote when I was younger. The passion and the militancy are those of a younger man. Don’t get me wrong. Nothing needs to be corrected, or retracted in any way. But if I addressed those topics today, the result would sound different.

Back then, I imagined there was a “big other,” as the philosophers say — a sort of “bad father” -- who was ruining the fun, who was harshing our vibe, and if we could just take that person out (or dismantle that group or institution), we’d have it made. I take it this was a common thought on the left. But after many years of examining the situation coldly, I no longer think that there is a big other. The problem is us. That’s why the great revolutions of the 20th century failed. There is no big other. It’s us.

EC: Yeah, that is the sad reality, right. My colleague and I have noticed a huge renaissance of and appreciation for hand-lettering and I wonder if you see your work falling into this category at all or are you influenced by it?

SF: I love the renaissance of hand lettering. I’m not a real sign painter. I just fake it. But my friend Heidi Tullman, now THERE is a real sign painter. She works freehand, with all the right brushes. I try to talk to her about typefaces sometimes, but it doesn’t work because she doesn’t have the vocabulary. She just has them all in her head. All of the typefaces, and all of the curves and counters and ligatures, they’re just “up there,” as she says. She’s the real deal. With me, it’s all, “Fake it ‘til you make it.”

EC: What are you working on now and does it tie into or break from the works we have been discussing?

Indeed, there is nothing more concerned with death than pop. Some people think pop art is sunny. I don’t. I see it as dark. To me it's morbid. It's macabre. Which leads to this question: Is pop dead?

Don and Mera Rubell dropped in at my studio recently. They were watching me put the matchbooks together, and Don said, “What’s annoying is that they work!” He meant that it was annoying that the matchbooks work as art; they shouldn’t. Pop shouldn’t work anymore.

Well, I’ll give you this: it’s actually hard making pop art now. There was a race to nail the pop image in the 1960s, and that race was RUN. It’s over. That’s the conventional wisdom. It’s hard making good pop, because it was nailed so decisively 40, 50 years ago.

I think Don was also seeing them too literally: “Here is a matchbook. It has words on it. It says, ‘Esso,’ it’s about gasoline.” Well, that’s only part of it. The matchbooks are also formal exercises. You can miss that. But if you want to criticize them for being shallow or banal, I don’t mind. (As long as you accept the death.)

EC: That’s wonderful – I like thinking about making something work, even when it “shouldn’t.” Anything else you’re working on?

SF: The other thing I’m working on is a series of collaborations with the New Orleans graffiti artist MRSA. Like a lot of graf artists, he has strong sense of formalism. Graf writers understand how to work with type, of course. But if they’re good they know about line, color, composition, balance — the formal properties are all there. Not that you have to like it, of course. Nobody has to like brutalism.