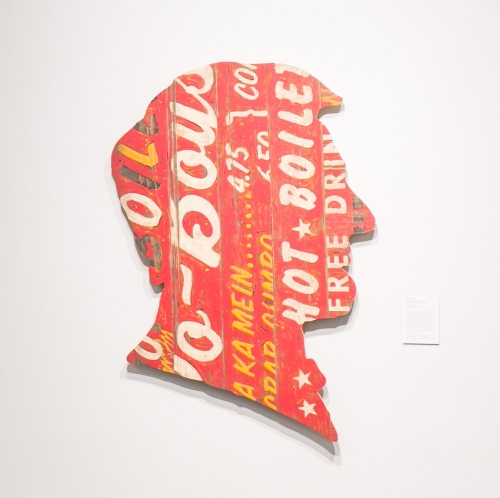 Red Lincoln (Po Boys) is a 2007 work by Skylar Fein that currently hangs in the contemporary gallery at the LSU Museum of Art. The eye-catching artwork is a profile of Abraham Lincoln fashioned out of a menu sign Fein salvaged in New Orleans after Hurricane Katrina. Broken down, reassembled, and cut to form the unmistakable outline of Lincoln, the image leaves traces of its former purpose in fragmented words and prices. Because the surface of this work bears its past but portrays its figure in a simplified form much like an advertisement, Red Lincoln (Po Boys) wants to be both historical artifact and Pop art. This duality exemplifies the artist’s approach to art making, which integrates history, aesthetics, and politics, and often focuses on queer history and experience. As an artist and self-identified amateur historian, Fein creates installations that grapple with the importance and complexities of LGBTQ history—to “do” queer history means to wrestle not only with facts and evidence but also with speculation and resistance.

For example, in 2008 Fein famously addressed the devastating 1973 fire at the Upstairs Lounge, a gay bar in the French Quarter, in the installation Remember the Upstairs Lounge. The work included photographs of victims, original artifacts from the bar, and a TV playing the original news coverage of the fire that killed thirty-one people. In addition, the bar’s entrance was recreated, a hallway constructed to give a feeling of scale, wallpaper installed with the same texture and color, and music played, similar to that played at the Lounge. Fein combined the real and imagined—based on fact, but ultimately Fein’s own creation—in this installation in order to give visitors an experience of the original space. (Photos via Jonathan Ferrara Gallery, New Orleans, LA; photography by Mike Smith)

In 2013, Fein displayed another installation, titled Lincoln's Bedroom. Like Upstairs Lounge, Lincoln's Bedroom was a mix of invention and history. It was an environment pieced together based on research and context that recreated a bedroom famously shared by Abraham Lincoln and Jonathan Speed in Springfield, Illinois in the 1830s. Lincoln’s Bedroom was a subjective space of sensory experiences that included music, scents, and everyday objects, with the central focus being the straw bed the two men shared, which was messy, unmade, and clearly slept in. The bed confronted visitors with a moment of history and asked them to question the sexuality of a prominent American figure.

Assuming that history is itself a kind of abstract space where imagined epochs and events are pieced together from research and evidence, Upstairs Lounge and Lincoln’s Bedroom act as literal historical space. History’s basic function reveals the past that has been forgotten or overlooked, such as the Upstairs Lounge fire, but history also falls into the subjective, the educated guesses and speculation, such as Lincoln’s possible sexual relationship with Jonathan Speed. Fein’s installations show both aspects of history coming together, which makes handling queer history so complicated, particularly because so much has been suppressed. But, they also show the necessity of continuing to scout out moments that bring new insight and question assumptions, allowing for a continued space to “do” LGBTQ history.