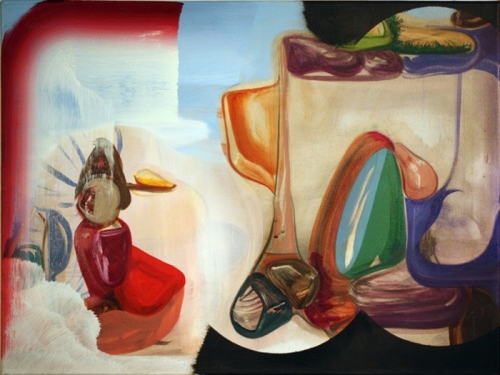 There were works by four artists that really caught my attention, and I believe that two of them are not connected to any New York City gallery – Elliott Green and Joshua Marsh. The other two were John Newman, who is represented by Tibor de Nagy, and Tamara Zahaykevich who used to show with KANSAS.

I have been thinking of the term “artist’s artist” these days, maybe because it used to mean an artist who had a handful of loyal fans, but not much attention from the public. At least since the days of Andy Warhol, the idea of not having wide public acclaim was regarded by some as a sign of failure, of possessing a small ambition, of having been deemed unspectacular or considered an elitist. This was “Join the Club” thinking, which may have finally passed, but not completely.

The last time I saw works by Elliott Green and Joshua Marsh was when they were included in the 2015 Invitational Exhibition of Visual Artshosted by the American Academy of Arts and Letters (March 12 – April 12, 2015). Held yearly, that’s one of the group shows you don’t want to miss. It was the first time I had seen work by Green in some years. He combined ravishing brushwork with mysterious, Xanadu-like landscapes that emerged, radiant, out of the undulating applications of paint. Rainbows, clouds, jagged mountains, verdant hills, pastoral lakes, and, most importantly, changing light in a panoramic view – it was all there and it was just paint.

I have the feeling that the grooved sensuality of Green’s brushstrokes, or what Alexi Worth called their “hardy, taffy-like consistency,” would make J.M.W. Turner gnash his teeth. But still life and a smaller scale make different demands than landscape, and I wasn’t sure what to expect when I went to this exhibition. Green’s two paintings, both from 2008, are small, 12 x 18 inches, and, like his abstract landscapes, they hover tantalizing on the cusp of legibility without ever tilting into the pictorial. There seem to be multiple, overlapping views in “Light Buried Underground,” as if something is being observed, remembered and imagined simultaneously. One thing is clear: Green believes in paint and its capacity, as a vehicle, for discovering the unexpected. As good as he is as a painter – and he is very, very good – he never seems to settle into production mode, never tries to show off. Somebody should give him a show, a big show.