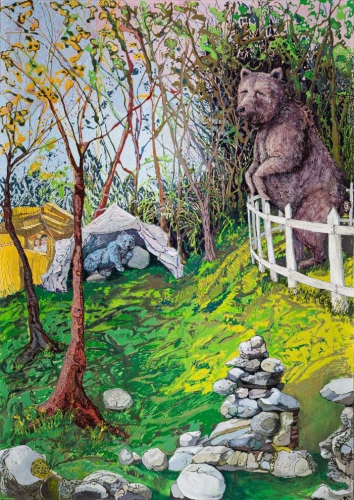 For all of its tactile qualities, the art of Gina Phillips can sometimes be hard to get a handle on.

That’s because Phillips’ art doesn’t fit neatly into a convenient category. Her pieces, which have often combined fabric and thread with found objects, applied pigments and mud, fall somewhere between painting, sculpture and tapestry — or, as Phillips herself has said, “between 2-D and 3-D.”

For her new show at Jonathan Ferrara Gallery in the Warehouse District, however, Phillips has returned to a more conventional medium: painted and carved pieces on wood. But that doesn’t mean her work is any less nuanced or captivating. On the contrary, her new show contains some of her strongest, and strangest, work yet.

The title of the show, “Stronger Than Dirt,” is taken from an old advertising slogan for Ajax cleaner. Viewers of a certain age may remember the TV commercials in which a mounted knight in shining armor charged through a landscape of dirty laundry, whitening whites and brightening colors as he galloped along.

In Phillips’ artistic universe, the phrase takes on a larger meaning. Here, “stronger than dirt” becomes shorthand for one of the main themes of her current crop of paintings: the concept of cleanliness as a sort of ongoing battle, one that is part of the broader theme of the conflict between civilization and savagery.

You won’t find the Ajax knight in any of the images here. Instead, you’ll see a painting featuring his more diminutive counterpart: the enigmatic Old Dutch Girl of cleanser fame. Phillips said she found some vintage advertising decals featuring the brand on a window in her Bywater studio, a former corner store, and the image of the mysteriously cloaked girl eternally chasing away dirt became a sort of avatar for her recent work. The irregular shape of the painting echoes the worn edges of the decals in her studio.

Phillips has often been described as a narrative painter, and it’s always evident that the figures and settings in her big, bold tableaus are telling a story. The fun part is trying to figure out what the story involves, a process in which Phillips invites the viewer to participate.

Take the large painting, “Thicket” (2014), whose central position dominates the current installation. In a brightly colored landscape, two children have constructed a pillow fort with sofa cushions next to a friendly-looking bear who sits contentedly in a tent beside them while another much larger bear looms behind a modest white picket fence on the opposite side of the painting.

The effect is both bucolic and unsettling: Sure, those bears look friendly enough, but somehow we’d feel a little better if that pillow fort were a little stronger or if that one bear was standing on the other side of a sturdier looking fence. For Phillips, the line between civilization and savagery is a tenuous one.

That conflict pops up again in a painting of a giant birthday cake that looms like a confectionery Tower of Babel next to a large anthill, whose occupants have somehow floated up into the sky while a brilliantly cheerful sun casts its light over all. The old cliché of ants at a picnic takes on a whole new meaning.

It’s also worth noting how Phillips’ earlier work has left traces on these new paintings. Many of the textures and patterns found in her fabric-based pieces reappear here, rendered in paint instead of cloth or thread, while the carved surfaces in several pieces add an additional layer of depth to her imagery.

“The painting technique I developed using squirt bottles looks a lot like the stitching I use in my fabric work,” Phillips said. “The relationship between fabric and paint has come full circle.”

Elsewhere in the show, look for the giant painted clothespin-like objects hanging on walls between paintings and leaning on laundry tubs in the corner. According to Phillips, they represent decorated versions of laundry sticks, which were used to stir and move loads of laundry in the days before electric washing machines.

Phillips transforms these domestic objects into what she calls “pawns,” which wind up being decorative and menacing in equal measure — almost like brightly colored weapons. Anyone who’s wrestled with their own spring cleaning this time of year would welcome some of Phillips’ creations in their arsenal.