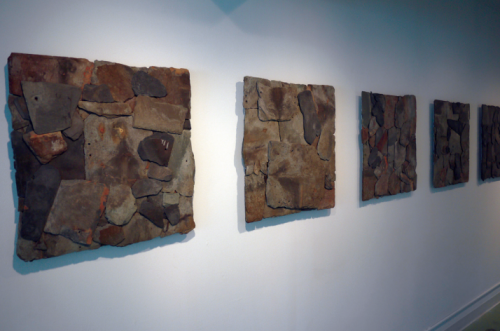 IN MARCH OF 2010, Rian Kerrane, Anastasia Pelias, and Melissa Borman collaborated in a three-person exhibition at the Edge Gallery in Denver. This was the first in what would be three exhibitions titled mara/thalassa/kai: the SEA, on the same theme: the artists’ relationships with water and the sea, and the narratives that link their careers and personal histories. Far from the dry climate of Denver, it is now at the University of New Orleans St. Claude Gallery in the water-bound city. The artists will later travel to Minneapolis, a city surrounded by lakes, for the third and final installation of the show. Though the work evolves in each showing, it is not necessarily site specific. Rather, it is a sign of mutability, much like each ocean wave, though made of the same matter, is unique. The title refers to this theme and to each artist’s cultural, geographical, and personal link to the sea. Kerrane, Pelias, and Borman investigate their connections to the ocean and each other through the media of sculptural installation; painting, assemblage, and video; and photography.

Mara, a mythological sea goddess, is also the Gaelic word for the sea. Dun na Mara, or “Fort of the Sea,” is the physical address of the house of Kerrane’s grandmother in Ireland, where her family still resides. A cast-iron deck chair strung with a swathe of ruddycolored knit hair symbolizes the matriarch. The iron is industrial, much like the plastic or wood that would frame any deck chair. But, the edges are ground and softened to suggest wear, lightening the gravity and roughness of the material. The hair is both comforting and discomfiting; it appears soft and familiar but it is dead and separate from the body, another play on material contradictions. 25 Installation view, mara/thalassa/kai, showing Dun na Mara (installation by Rian Kerrane); and Alati (video by Anastasia Pelias). History is bound in the knots that link each loop of hair – the knitted form is a sign of the artist’s process as well as a symbol for the events that shape personal history. The model for this chair sat in the back garden of Kerrane’s family house. This “fort of the sea” was a mere distance from the ocean, which is suggested by soft waves of plastic undulated by table fans somewhat obscured beneath the surface. The fans change the landscape of the plastic, which has the rumpled and reflective surface quality of water. Kerrane elevates utilitarian materials to another plane – an unconscious kind of realm, which might be symbolized by the ocean itself.

Thalassa is the primordial Greek goddess who represents the Aegean Sea. Pelias, who met Kerrane during graduate studies in the Master of Fine Arts program at the University of New Orleans, is also bound to Skopelos, Greece, the island where her mother was born. Her video, titled Alati, meaning “salt,” is a collection of moments filmed on the island: a mouth delectating over ocean rocks, dappled water, an olive tree, a person in white appearing and disappearing behind a stone monument. Cicadas and the movements of the ocean form the soundtrack, which abruptly falls off and returns. Time is an inherent element of any video work, but the intimate views created with measured zooms towards the subject matter imply a conscious pacing and slowing, a savoring of these instants. The form of rocks beneath water from the video is repeated in a series of two-dimensional works created with found slate reclaimed after Katrina. The grayed, rusted, and smoothed tiles suggest the wear of a flood, and as two-dimensional works they mimic the aerial views of roofs that were so common after the flooding of the hurricane. Pelias is a native to New Orleans, a survivor of the storm, and so these pieces have a poignancy and heartbreak belied by their hard surfaces. The slate pieces are paired with large-scale, atmospheric paintings that recall the emotionally devastating works of Mark Rothko. Process is evident in the drips of paint that trace gravity down the sides of the works and the glazes of colors that peek through to the surface. The experience of viewing is like looking through the water to the bottom, but in these works there is no end. They are sublimely unbound.

Borman’s photographs are also sublime; though small in scale, her images of the water mounted on aluminum, taken as she swam through the ocean in Mexico, loom against the lens of her camera and so against the viewer. Much like a diver preparing an eye mask with spit, Borman licked the lens of the camera to maintain clarity in the images. In the title of the show, Borman is kai, the Hawaiian and Japanese term for the ocean. She lived in Hawaii until the age of eight, when her military family’s peripatetic existence brought her to other areas of the United States. This biography, and fact that water truly links all, abolishes the geographical boundaries of her photographs. In the show, the Mexico images are paired with larger photographs of Irish kelp. This is her link to Kerrane; the two artists collaborate in summer programs with art students in Ireland. The kelp images, like the Mexico photographs, picture surprising landscapes. Strings and clumps of kelp pile against clouded blue skies, becoming mountains rather than palm-sized mounds. As the artist says, it is “just a little disarming.” The images are meditations on the epic nature of the smallest moments, but they are also records of the artist’s examination of personal history and place. These documents of familiar things from unfamiliar standpoints suggest the delightful newness that can be found in a different vantage point of the mundane, as well as sameness among differences.

The sea links and cools the distant continents that delicately float on the hot crust of the earth - though separate, they are always touching. It is the symbol of the unconscious, ripe for exploration, both familiar and unknown. It is a fitting metaphor for the lives and work of these three women, who have found each other through chance, and who explore their individual memories and histories in the context of each other’s art in this series of exhibitions. Like the water, the ideas remain constant, though the way the work reveals itself will always change.